My former seatmate, David, always chided me for drinking 3-in-1 coffee. He tried to get me and Myra to reduce our sugar intake. Twice a week we'd go buy coffee at Starbucks or milk tea at Gong Cha. He was relentless and even set no sugar days on our calendar. I'd just skip the fave beverages on those days. His efforts eventually worked because I became more conscious on what I eat and drink. My daily 3-in-1 coffee ritual continued though. 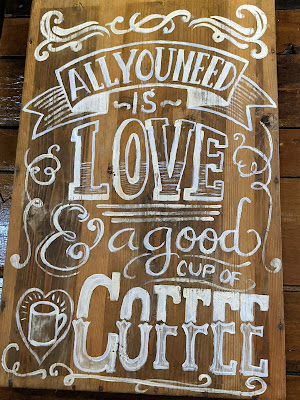 I usually brought back with me my 3-in-1 coffee supply from Manila. It was the lockdowns that broke my daily ritual. I couldn't find my favorite drink in Singapore. I took it as a sign and opportunity to try freshly brewed coffee. I started with drip coffee and got curious and got a Hario V60 dripper. To try it out I got ground coffee from CBTL to try. I liked it and enrolled in Commune's coffee 101 lesson to understand coffee better.

I learned a lot from the lesson. I was able to improve my pour over technique. I wasn't ready though to advance to grinding my own coffee, so I experimented on variants and milk. I liked the ones that had nutty tones and I found out that British milk worked well with coffee. I just chanced on the milk from M&S which was located where I used to do PT. I looked forward to going home because I knew there would be other variants to try.

I also joined the Coffee Home Brewers group after the lesson and learned more from other members. Started the coffee journey in 2020 and late last year we finally decided to get a grinder. I realized we should have invested in a grinder earlier because it got better. It also helped Miggy fully wean away from instant coffee. We're still doing pour over for now. We're saving up for a machine.

So that's how I finally gave up on instant coffee. I tried drinking some last year and I didn't like it. As my physiotherapist Wendy says, "You've become a coffee snob." LOL. I think it was a good shift because it's healthier than drinking 3-in-1 which has a lot of sugar. David would be proud :)

Email ThisBlogThis!Share to TwitterShare to FacebookShare to Pinterest
Mga etiketa: coffee brewing, coffee for beginners, give up instant coffee, giving up 3-in-1 coffee, reduce sugar, wean away from instant coffee, wellness tips