It's been five years since Sweetie and I became a couple. A lot of my friends find our story so funny because Jay only realized that we were already a couple a week later! The full story is at the site he put together before we married. I can't believe it's been five years already, but all I can say is "I couldn't ask for more" since God truly wrote a great love story for me.


And six years today I started this blog in Mountain View, California at the encouragement of some folks from the Blogger team. I was just visiting campus then for training for my new role and they asked us if we can start a blog. I'm the only one who's still blogging, only because I really love to write. I may not be able to blog as often as I could, but I have a gazillion of photos waiting to be blogged. Hopefully when I finish my major projects for the year I'd have some time to write more.

Well, just wanted to write a quick post about these two achievements today! Hope to be able to write about my adventures soon. 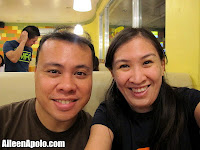 Last night on the flight to Davao Sweetie asked me to listen to a song playing on his MP3 player. At first I didn't recognize the song, but I soon realized it was our theme song. Sweetie was reminiscing our last trip together in Davao in 2009. It was the trip where he proposed to me while I was hanging on a zipline (I clearly didn't have a choice!).

If I could I would live in Davao because I just feel so right at home here even though I don't speak Bisaya. I understand some of it though because some of the words they use are very similar to the Bicol dialect. I love Davao because life is simple here and you can get the best of many things. Low cost of living, awesome fresh food all year-round, the beach and the mountain is just minutes away and I have made a number of fantastic friends as well in Davao (and my Mom says I have relatives here too).

My favorite restaurant in the whole-wide-world is also located in Davao - Lachi's Sansrival Atbp. Owned and run by twins, Mike and Melvin Aviles I discovered Lachi's many years ago through my Davao-based friends. I instantly fell in love with their pork marinara and unforgettable pork ribs and sansrival and multitude of cakes and pastries. And mind you the prices are so affordable. They have quite a lot of dishes and I'd probably eat there for breakfast, lunch and dinner if I could. So if you by any chance visit Davao make sure you visit and eat at least two dishes and two desserts from Lachi's (I do everytime!).

I've actually been craving for pork marinara for almost 2 years now because I haven't had the chance to visit Davao since 2010 (argh!). It sometimes haunts me especially when I'm somewhere where I can't get what I want to eat (I'm a picky eater sorry). I discovered a resto at Changi Airport though that has a slightly similar dish. I'll probably head there when I'm really desperate.

The unforgettable pork ribs lives up to its name. Once you try it you will surely come back for it. I'm not really sure how they cook it but it's really awesome. They also introduced a new dish - Elsie's melt-in-your-mouth roast pork - which is true to its name.

Another new dish we got to try was the Asian spicy chicken. I didn't get to try it since I'm allergic to chicken but Sweetie said it was like chicken chicharon and I noticed Miguel kept coming back for more long after he finished eating.

For fish lovers, Miguel always orders fish fillet whenever we eat at Lachi's and that's what I get as well whenever I feel guilty about eating too much pork (I feel I'm going to get a scolding from my doc soon...).

But, of course, one has to leave space for dessert! I had a bit of a hard time deciding which one to order. I eventually decided to get my favorite - the Five Choco Torte. Mind you all the cakes, cheesecakes and pastries in Lachi's aren't that sweet. They're actually perfect because it's the only place where I can eat as many slices of cake as I want and my tonsils don't react (they're very sensitive to sweet stuff). So that's why Lachi's my favorite restaurant in the whole wide world. 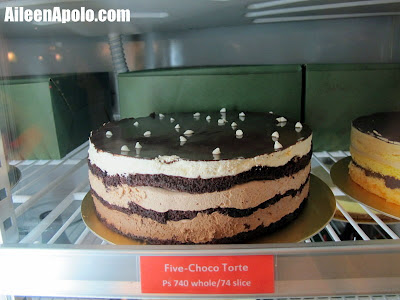 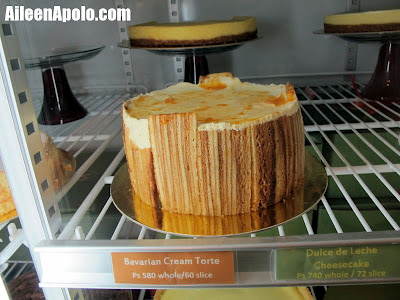 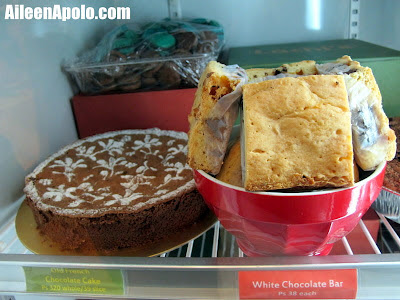 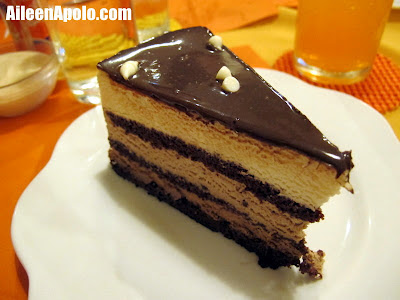 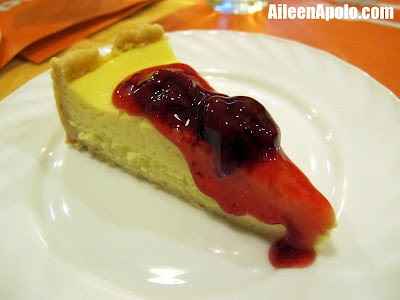 Thank you Mike for accommodating us! I hope to be back soon! 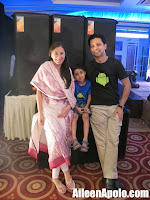 The first time I met Badar in Mountain View six years ago he invited all of us to visit his country, Pakistan. We'd meet every quarter since then and we'd share stories about our own countries every time. I was intrigued and wanted to see for myself the beautiful country that my friend Badar painted for us.

It took months and lots of careful planning and I, together with a couple of colleagues, finally found ourselves visiting Badar in his homeland. The trip was made long by the 5-hour lay-over in Bangkok, it was tiring, but I was just excited to finally see for myself the real side of Pakistan - it's everyday life and not the image always shown by media. 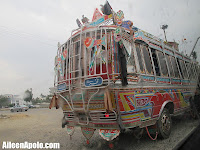 As we sped along the highway to our hotel I was amazed at how much space Karachi had. Very much opposite of my home city, Metro Manila which is pretty cramped compared to Karachi. Huge birds circled across the sky - the kite bird according to Mubashak - which shows that the environment is fertile and very green. The road was littered with fully-decorated buses and trucks and beside them our colorful jeepneys would actually look plain. And the people walking along the streets or just hanging out were in colorful traditional garments. 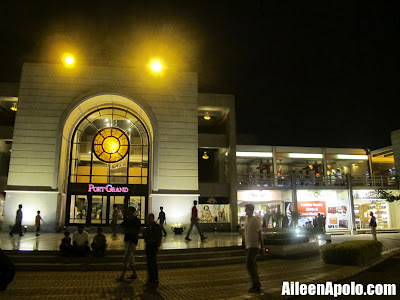 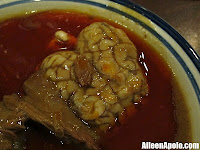 In the evening, Badar brought us to Port Grand, an area known for its night life. As we were walking along the board-walk I felt like I was walking in another very similar place I'd gone to with Badar -- San Francisco's Fishermans Wharf. It was almost like a replica. We had dinner at Ghaffar Kabab House where we had loads of kabab. I don't eat spicy stuff, but it was too good to pass up and I must've finished half the bowl of yogurt (haha). The most interesting thing I tried was "brain". Nobody wanted to try it, but I wanted to show Badar that I was game for anything so I tried it. The texture was mushy and I understand it's an acquired taste, but it was okay and at least it contributed to sharpening my intelligence (that's what they said). 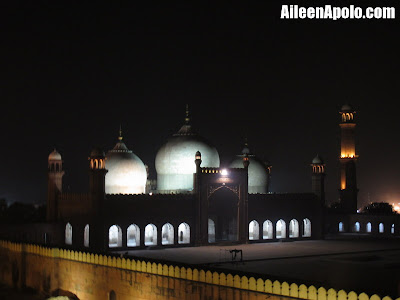 In Lahore, Badar brought us to the "Old City" so we could visit the Badshahi Mosque (corrected). It was a bit dark when we arrived since electricity was down but the walled city had some lights on. The area was huge and I'm sure it would've been better to visit in the morning. The mosque stood majestically on one side. It was closed, but Badar made a special request so we could get in. We took off our shoes before we went in and I marveled at the intricate artwork on the ceiling. The mosque could house 100,000 people and at night it looked beautifully mystical. 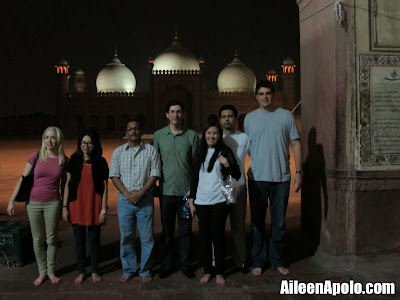 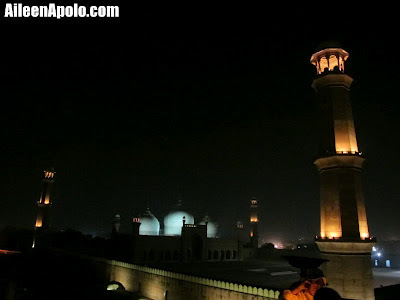 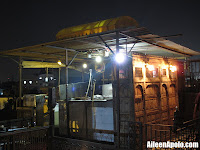 After a walk around the walled city we headed up to Cooco's Den & Cafe. A well-known roof-top restaurant that was owned by an artist/painter who helped rehabilitate the area which is known to be the red-light district. The roof-top restaurant had the most beautiful view of the mosque. Food was deliciously spicy and a variety of local meat dishes (apparently they eat a lot of meat in Pakistan). Since I already tried eating brain I left the sampling of testicles to my colleagues (it looked like ground beef though).

Our last day was spent in Islamabad. The most-well planned city according to Badar and Mubashak said that the vibe in Islamabad is very much different since the weather is cooler. Islamabad is also where the Himalayas start. We had dinner up in the mountain, overlooking the city. The sparkling city lights looked very much peaceful from up above. 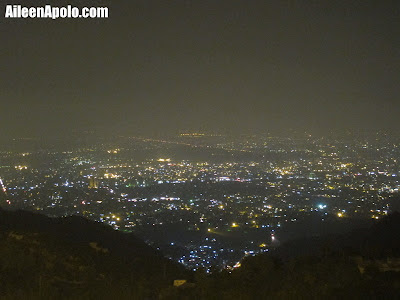 We didn't stay out too late, but chanced upon a pre-wedding party at the hotel which we promptly gate-crashed just so we could see what was ongoing. The henna ceremony was over, but we got a glimpse of the very beautiful bride -- she looked like a goddess! The party attendees started dancing and it was a flurry of color going around and around. I didn't dare go onto the dance floor since I was just happy to see how the party went (I realized that our weddings are so mild and proper!). 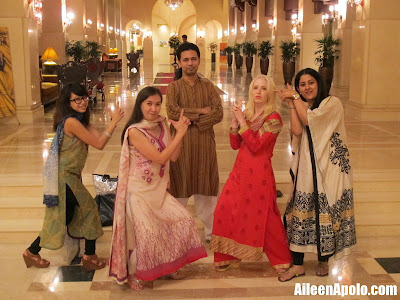 So that's just about what we managed to squeeze in between work. We did managed to do some very light shopping -- just for a dress and some shoes, but I was surprised that there weren't any fridge magnets or tiny trinkets I can bring back for my girl-friends. Hopefully next time I'll be able to get Sweetie some of their local tea (which is bigger than coffee and definitely more potent than coffee!). We almost missed our flight back since going through immigration was an adventure onto itself (be sure to be there at least three hours before!!!). 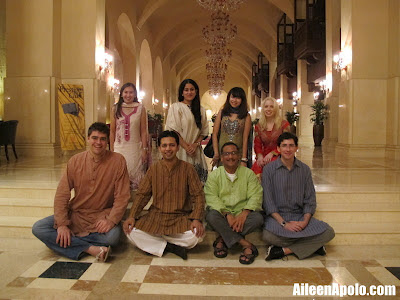 Pakistan is unlike any other country I have visited before. It's beauty and warm people are its best-kept secrets. Someday when it's ready it will be a tourism haven which will give a lot of other places a run for its money.

I will be back!

Just got back from an amazing adventure in Pakistan. Thought I'd share some sunset photos I took. One thing I realized while I was there... they are no different from any of us because we share the same sun. 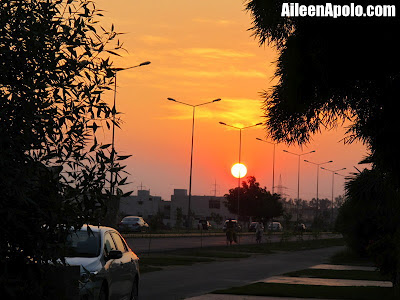 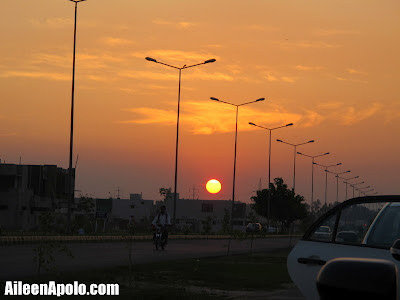