Renovations have resumed today. We're targeting to finish all indoor fixes by month end. I suspended unboxing the kitchen stuff today since the backsplash was partly installed. I took advantage of the opportunity to renovate the kitchen. I drew a plan on where I wanted to place everything. Here are some practical add ons I requested -

My goal is to rid of clutter. Seeing all the cooking utensils crammed beside the stove is an eyesore. Saw the idea to put them in a drawer from Pinterest so that's what we did. I already had two Ikea utensil holders and we just re-used it. There are three slots for it, I just need to buy one more. I also started to decant some of my frequently used ingredients (oil, soy sauce and vinegar). Found the container* at Landers. The container was perfect since the liquid doesn't drip down after you pour. 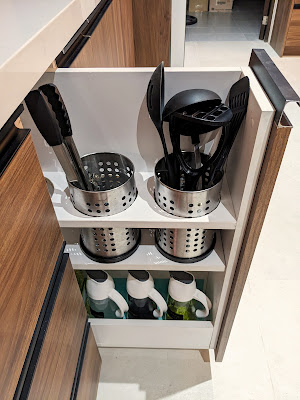 Apparently I have quite a collection of baking pans (lol). I had pans here and in Singapore and it got quite gnarly to pull out what I needed when we stacked it inside a cabinet. Again saw a good solution on Pinterest and I'm glad the manongs indulged me. I excitedly put them in the other day when I finally got them out of the box. I can't wait to start baking again! 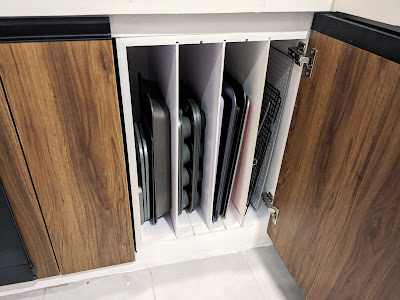 The original tiles that came with the house looked okay, but they eventually started to stain. I couldn't get the stain out and Architect Wansi suggested to just change it. They gave me several options and I chose Graphicote since it's easier to clean and requires lower maintenance. The last apartment we stayed at in Singapore used Graphicote as backsplash and I never had any issues just wiping it. The supplier only installed half since the factory made a mistake with the size of the other side. 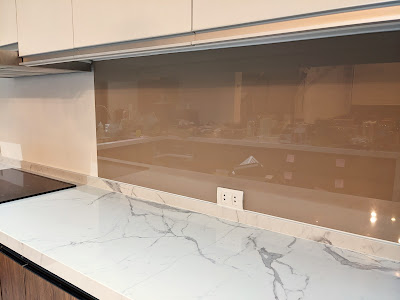 Always wanted to have a dish drain cabinet like what we had in Singapore. Ideally though the cabinet should be on top of the sink. Since dishes can be quite heavy, I relented and agreed to place it as a drawer. It's where we keep frequently used dishes now after they dry. I still need to figure out how to dry dishes without it being an eyesore. I'm unable to visualize it for now since I'm still washing everything that's coming out of boxes. 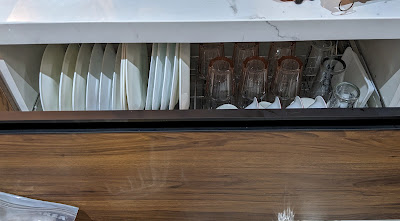 I had two spice racks in the old kitchen. Retained one in the main kitchen and had the other one moved to our service kitchen. Just make sure not to install a spice rack beside an oven. I had some spices that became unusable because they hardened (whoops!). I'll use the one in the service kitchen for something else. 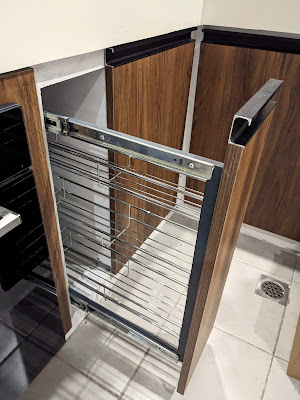 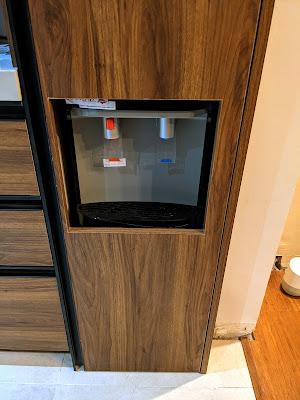 You could see from the backsplash photo that the counter is currently a huge mess. I'm still figuring out how to properly store things and I'm also working on retiring items I don't need anymore. It's going to take awhile before I finish fixing the kitchen.

*Masflex container, around PhP229+ if I remember correctly (it was on sale after Christmas)

**Ikea utensil holder, currently selling at PhP300 at Ikea. It was just half the price when I bought it a few years ago in SG. You can also buy a matching black bottom for it, can't find it though in the website.