I can commiserate with Grey*. I've been observing him the past few days from my maker room. We moved his bed outside of my room since there was a lot of movement where he used to sleep due to the renovations. The past few days must have been very hard for him because three orange cats have been barging in to attack him. I think they were trying to take over his territory. We had to help break up the fights since it would get so loud and alarming. 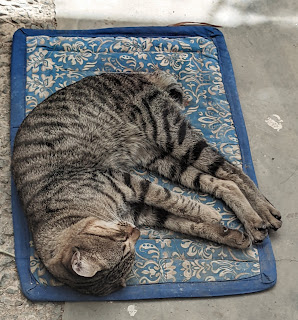 It's pretty much similar to what I go through whenever I go to sleep at night. I have a hard time sleeping because I'm afraid I'd wake up with back pain. I've observed Grey take multiple cat naps . He falls asleep and then wakes up to check the area, probably making sure that the three orange cats aren't lurking. The good news is I'm a deep sleeper, I rarely wake up in the middle of the night. The back pain usually starts in the morning.

I've been tracking my sleep pattern through Fitbit. It's consistently reported that I fall asleep longer compared to the average time people fall asleep. I've managed to lessen then time by adjusting my lifestyle. I  fall asleep faster when I have more movement or exercise during the day. A tired body seeks rest. I also make sure not to eat at least 3 hours before bed time. Avoid GERD (which also results in asthma). And avoid social media/reading messages before going to sleep. Sometimes I read something that triggers my PTSD. Seek peace and quiet.

One thing I haven't been able to do is get more sun. I take vitamin D3, but getting enough sunshine is better. I came to this conclusion when we went to Bohol. I'd wake up earlier, go out and I end up falling asleep faster. I wish I could just live by the beach (haha).

My doctor solved my breathing issue after my first PE. He said you get better rest when you don't have breathing issues while asleep. I used to be so tired even when I had 8 hours of sleep. Fitbit showed that I'd actually wake up so many times while asleep. Doing deep breathing exercises and my meds helped. Breathe easy to sleep well.

I've been working on correcting this issue for years now. I was able to wake up earlier already last month, but the holidays ruined it. Well, that's something to work towards again :)

*Grey is the cat who adopted us