Home on Mondays: Decluttering | The Number of Pillowcases We Amassed

Slowly continuing the process of decluttering. Our coach, Ally Canita, said it's best to bring everything out, categorize and then choose what to keep and let go. Our lines were finally merged from our two homes. We've moved a lot, but never had the time to retire stuff. It was harder to do in Singapore since we didn't  know where to donate items. 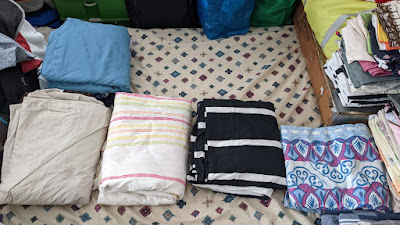 Sweetie had to remove the linen from the closet since it's going to be fixed. He took the opportunity to organize the linen so it would be easier to choose what to keep. We were surprised to find out how many pillowcases we've amassed in the past 13+ years. NINETY EIGHT! We do have a lot of pillows! 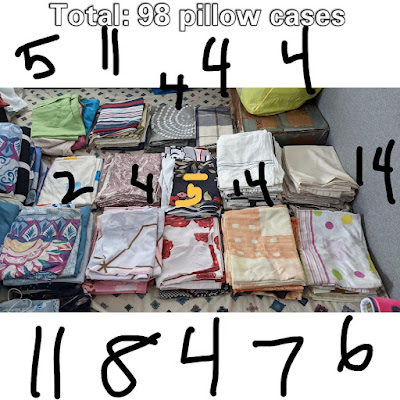 Some of the lines are really worn down already. I won't donate those anymore but instead use them as backing for my quilt projects. Moving forward I think we'll limit the number of linens we have. One reason why we have a lot is because we delay washing laundry when we get busy. A tip I picked up from But First, Coffee is to limit the number of items you have so you are forced to wash laundry more often.

Once we're done sorting, I plan to organize the linens properly. We've always had difficulty finding matching bedsheets and pillows. I think it was Marie Kondo who said it's best to keep matching linens together so it's easier when you need to change. You can also opt to tie them together with a ribbon and put them in baskets. I think that's a good plan. Now I just need to do this 100 times more across the house, LOL.