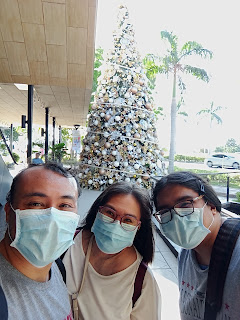 We're usually hungry after buying some groceries at Landers. We usually go on a weekday to avoid the crowd, but since we're tied up with renovations we only had time to go last Sunday (after a full month of just being home!).

We normally buy some food before going home, but the queue was so long we decided to check out the Alabang West Parade. We saw it when we went to Landers for the first time last month and was curious to check it out. We immediately checked if there were any good places to dine at via Google Maps.

Boy it was hard to make a u-turn from the gasoline station. They should probably place a traffic light in the area for safety (and remove that McDonald's signage since it's blocking the view of drivers). We eventually found ourselves at Alabang West Parade.

We were so hungry and went in the first resto that was almost empty. The place housed two restos, Bad Bird and Tsuke-men. Miggy got some umami chicken. I had gyudon (their best seller) and Sweetie had Japanese curry. We were so excited because it was first family lunch out. We used to do that after hearing mass before in Singapore before Miggy went back home. Good thing it was an odd time to eat lunch so the resto was pretty empty. 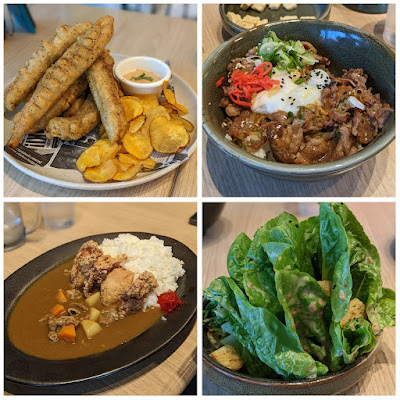 After eating we went around and checked out what else was open. We went to UCC to check out their coffee, but it was full so I immediately went out after looking at the menu. They have eggs benedict! It's one thing that's been hard to find here, so we'll likely go back one of these days. Milk tea lovers would be happy to hear there's Macao Imperial Tea. I noticed though there was a number of steak places, Brotzeit and Wolfgage (obviously their target market is very different). There's Mama Lou's if you want pasta and several new places have just opened too. Got some peppermit mocha frap (non-fat!) just before we left. 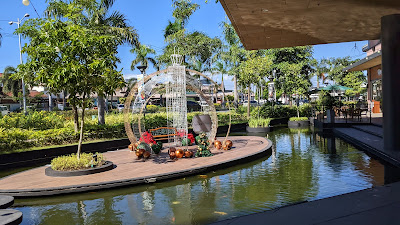 Alabang West Parade is a nice new place to explore. They have a number of these smaller resto/shopping nooks across Alabang (at least two between West Gate and Filinvest). It reminds me of neighborhoods in the US where they have a row of stores. Near AWB is a market where you can buy fresh seafood. Lots of places to explore!

The best thing about being part of a community is you gain an extended family. I had a multitude of Ates and Kuyas as I grew up. They were also all my neighbors so we naturally hung-out after our service. We spent many years celebrating birthdays monthly.

It was a monthly feast where we got to sample their specialties. It was fun because we all came from different provinces. We usually buy Baliwag chicken also as an add on. During those times we didn't need to diet, haha.

The kids back then were all still chikitings. They had their own little world while the adults would eat then do some jamming. It's a great memory for me because my choir family did not make me long for my siblings who both lived in other countries. Most of the kids now are already working, some in university and a few still in high school.

Soon enough though we started fragmenting. People started to get married and move to other places. Some of us moved to other countries because of work. We were able to have Christmas reunions for a few years, but it was hard since those who'd come home would also be busy with their family reunions.

When we came home, my Ates and Kuyas welcomed us back. We've been able to see some of them and they also helped us when the boys had COVID-19. I'm eternally grateful to have my choir family and hope when renovations are done we could host a get-together or smaller dinners. 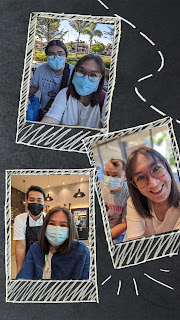 I was better at taking care of my looks when I was still working. I honestly got lazy moisturizing during the lockdown. My cardiologist had a dermatologist look at me too when I was hospitalized. She just advised me to moisturize everyday (luckily she did not find any issues!).

I was browsing through a PE* patient support group last week and one of the patients advised that it would help if you make the time to make yourself pretty. Fix your hair, moisturize, put on some make up, wear some earrings. Make the effort to look good because it will help you feel good.

Thought it was good advise. The day after I started to moisturize twice a day. I also started to wear earrings after taking a shower. It did make me feel better. Last Sunday, I finally got a haircut after over a year. I've been attempting to do that for six months now. I even asked the hair dresser to give me some bangs! LOL.

While it doesn't remove the fact that I sometimes feel unwell during the day, at least I'm more presentable now, haha. A friend told me to buy a new pair of sneakers. Told him I rarely go out. He said I could wear them at home. Haha. Told him, maybe I'll eventually get there.

After getting inspiration, I started doodling on how I wanted my first seat cover should look like. I decided on a simple Santa and snowman design. I quickly pieced the base together and soon realized it was harder than I thought it would be. 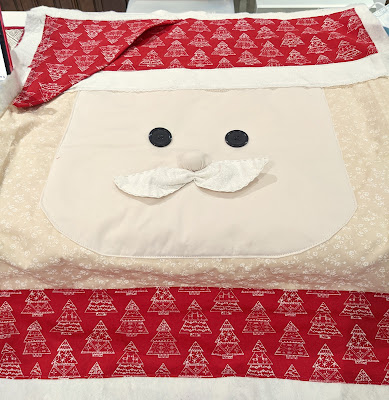 The first big hump was the size of the face. The first one I made was too small. I made several templates before I replaced the face. I'll just use it for another project. The second hump was making the nose. I thought it was as easy as making pincushions. It took several tries before I was satisfied with what I made. Third challenge was making the mustache. Then I realized I didn't have big buttons for the eyes. Luckily the one I ordered online was delivered in two days.

I'm probably just halfway through. I'm debating on whether I'll add more hair and a beard for Santa. I didn't realize it would be this challenging, haha. The tree skirt was much easier to do. Hopefully, I'll be done before Christmas!

The wood removed from our kitchen started growing orange mold spores. They are called Aspergillosis and can cause infection. I felt very unwell after I tended the plants yesterday, so I probably inhaled some of it. Wore a mask when I went out to spray them with vinegar.

The workers were thinking about re-using the cabinets that were removed. After seeing how the wood that was used easily dissipated when it got wet, Mang Gary said it was like biskwit when wet. They just shook their head when they saw that the cabinets eventually developed spores. 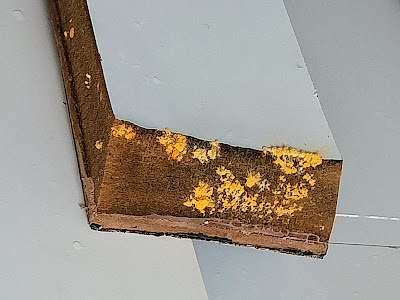 I was so excited when we moved in our new home almost a year ago. I thought the kitchen was perfect. I noticed a strange smell from the drawer though when I started to put away kitchen items. Complained about it and the contractor just adjusted something under the sink. The smell though persisted and we were told to "monitor" the situation. 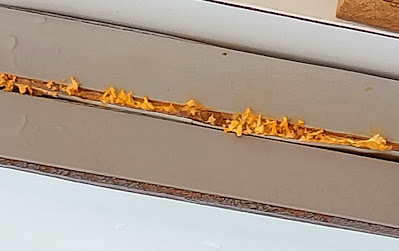 Few months later, one of the cabinet doors came off when it was opened. Pest control crew confirmed it was termites. We only found out when we ripped up our kitchen that the smell was coming from where the termites lived. It wasn't the drainage which we originally suspected was the culprit of the bad smell*.

I just thought it was  a good thing we decided to renovate the kitchen. The ruined cabinets due to the termites, the smell, the kitchen lights that got wet and eventually finding out about the bad electrical installation, soured my relationship with my kitchen. Those orange spores would have eventually found it's way in the kitchen since the cabinets do get wet**.

We requested to have the discarded cabinets removed immediately since it was making me sick. I tried to keep it from spreading by spraying vinegar. It helped a bit, but they were just too many and I was afraid it was going to spread to my plants.  The infested cabinets were removed the next day, whew!

So if you see orange spores (or fungus) growing on your cabinets, do not touch it or go near it (wear a mask). You can remove it with bleach, vinegar or hydrogen peroxide solutions. I used vinegar and it immediately dissipated. I know though it would take several sprays and days to completely remove it, so it was a relief when it was immediately removed. I read that these things grow in the bathroom too. Just keep things clean and you should be alright.

*There were other issues with the drainage.

**The cabinet doors were installed incorrectly. They were jutting out of the countertops.

Sunday Miracles: Christmas is Just Around the Corner

It's advent already! How time flies! It's almost a year now since we moved to our new home. I was hoping to prepare our home for Christmas early, but alas there's still a lot of work to do to make our home safe. Yes, safe. We were finally having some cabinets installed and we requested the firm to also check our electrical installation since lights kept flickering. 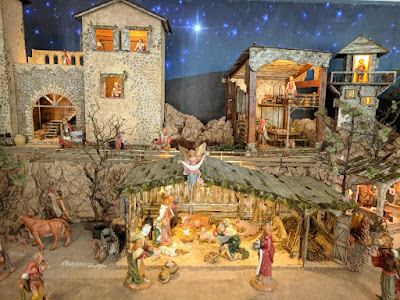 We opened a full can of snakes when the garden lights were removed. It kept short circuiting and we felt unsafe. Still reeling from the trauma of the fire behind our house, we asked to review our indoor wirings. Let's just say it wasn't just a can of snakes, but a cargo truck full of snakes. We discovered something that could lead to a huge disaster.

And it's really been stressful for us. Strange noises and strange smells have been making us paranoid. I explained the situation to my Tito and he reiterated what the electrical engineer told us. The situation is really concerning and potentially perilous. I'm grateful my boys are there because the stress hasn't been good for me.

They say that you should always deal with life with a grateful heart. TBH it's been very hard for me not to freak out about our house. We saved up for it for 15 years and we thought everything would be in good order. I reminded myself that it's a situation that can be corrected and we're getting help to fix the issue. It's also a good thing that we discovered the violations early, at least we can avoid a potential disaster.

Advent is a good time to take stock of what you have and what you can look forward to. This year has been really challenging for me and my family. I take comfort in the fact that Papa God is there. Mom also keeps reminding me to just pray. Let's just hope and pray for a good and happy Christmas :)

"Jesus looked at them and said, “For human beings this is impossible, but for God all things are possible.” - Matthew 19:26

It's poinsettia season! Of course, I just had to get one. I actually got two, one for Mom and one for me. I suspect though the one I gave Mom is doing better. Mom always had poinsettias during Christmas. They stayed red beyond the Christmas season. I figured it was easy to manage. Not. 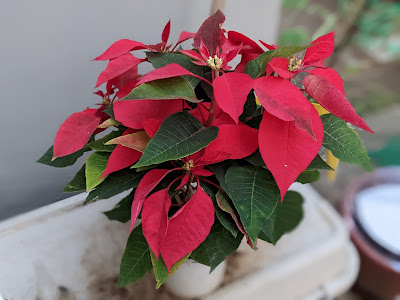 Since it's my first time to have this plant, I did some research on how to properly care for it. Here's some tips I got -

I think I need to transfer the poinsettia from where it's located now since it's been shedding a lot of leaves. It's still quite pretty though and I hope it stays alive until after Christmas. I'm thinking whether I should buy more, but with renovations ongoing I'll probably just try again next year.
#BeKind #StaySafe
Ipinaskil ni Aileen Apolo-de Jesus sa 11/26/2022 04:18:00 PM No comments: