Finally finished one seat cover for our dining chairs. I thought I'd finish it in time for Christmas, but so many things happened since I started the project in October. I decided to make one because our dining chairs are too big. None of the covers being sold in the market would fit them.

Originally thought of using my Christmas jelly fabric roll, but thought that would be too simple. While searching for seat covers I saw some cute Santa designed ones. I looked at Santa quilt patterns and they looked easy enough to do.

The trouble started when I was trying to adjust the pattern to fit the size of the chair. The shape was odd and it was a bit difficult to visualize. It looked fairly easy to do on graphing paper. Went on to cut the fabric and I worked on piecing them together. The second issue cropped up when I sewed on Santa's face. It looked too small. I made several paper iterations before I settled on the bigger face. 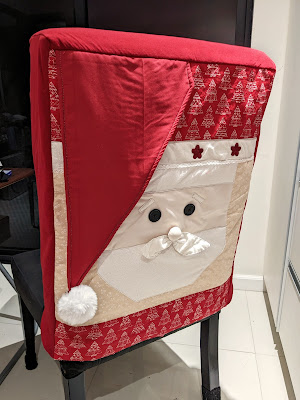 I wanted to use whatever I had available in my maker room. Then I realized that the mustache wasn't enough. Santa needed a huge beard. Good thing I still had some of the white vined fabric I originally used for his mustache. It took me a week to finish the beard because I fussed over the size a lot. I thought I was going to finally free from issues. 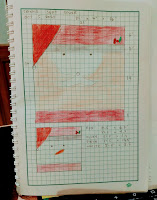 Nope, issue number four cropped up soon after. I didn't have the right materials to complete my project. I tried to make the items I didn't have, but they did not turn out well. Good thing  you can buy almost anything online and that's how I got the bigger buttons, the red flowers* and the hat pompom.

Finally finished piecing together Santa after several iterations of the hat (I still think it's not perfect). I went ahead to cut the stretchy fabric**. I didn't realize that it would be so difficult to use stretchy fabric. I thought I cut the right size, but it came up short. Set it aside for a few days and realized I needed to use interfacing to keep it stable (gaaah). So that's what I did.

It wasn't home free after that because it was still difficult to combine it with Santa. Finally finished one piece out of size just an hour ago. It's far from perfect and now I have to think about how to make it easier and cleaner. Well, I have five more to go through, so maybe I'll perfect it by then, haha.

*originally wanted stars but none were available