When I heard from my friend, Karla, that the Eraserheads was going to have a concert in Singapore I immediately fixed my schedule to make sure that I would be in Singapore. My original plan was to watch with my colleagues but many of them had made plans to be out of the country because of the long holiday, so I thought since it's my birthday month I might as well enjoy the concert together with family! Luckily Malacanang declared August 9 a holiday as well in Manila so my boys didn't have to miss work/school. 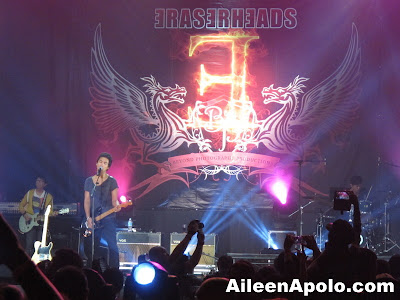 I worked on increasing my stamina to make sure I finish the concert and luckily an angel called up and saved me from my wobbly legs while waiting in line for 2 hours.The last time I watched the Eraserheads was in 2008 during their first reunion concert. I missed the second one because of my health. Who would've thought I'd be able to watch my favorite rock band in a rare concert just a few months after surgery? :) 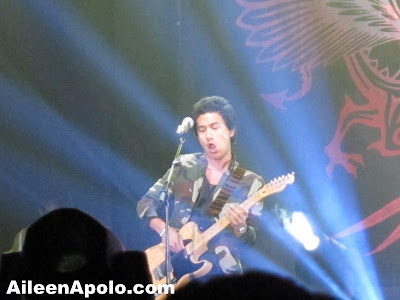 I wanted to stand, dance and sing all throughout the concert but since we got tickets in the seated area we had to sit (they do follow rules strictly in Singapore!), but we got to do so towards the end and all throughout the encore. I always listen to Eheads songs since I have their albums on my iPod and so I enjoyed singing along during their performance. There were no gimmicks, no intermission, no fluff, just pure Eraserheads. And they didn't really need to do anything. They could've performed on an empty stage and I think the audience would have still gone wild just the same. 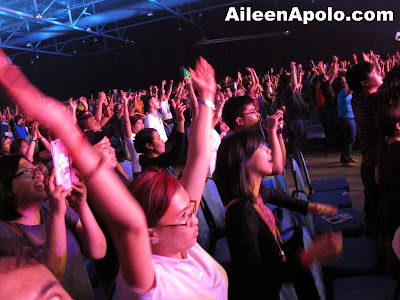 I do have a lot of favorite Filipino bands but the Eraserheads has always been (and always be) on the top of my playlist. I think Ely + Raimund + Marcus + Buddy put together is magic and no other Filipino band has been able to replicate this in my lifetime (I say mine coz I'm not sure if there are others). And I think a lot of other Filipinos see this. I saw a couple of people in the audience bowing down with their arms raised like they were venerating gods. 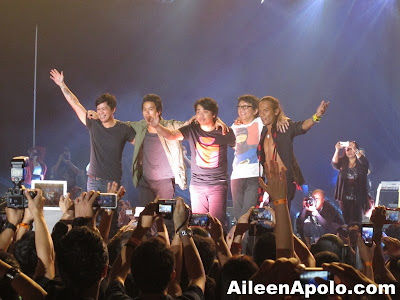 I had a mighty good time at the concert. From start to finish. There wasn't any dull moment and I was truly amazed they performed straight for more than 2 hours! I was especially ecstatic hearing my favorite Eheads songs live and hope that I would be able to watch again sometime in the future. And hopefully by then I can not only dance, sing, headbang, but jump too! 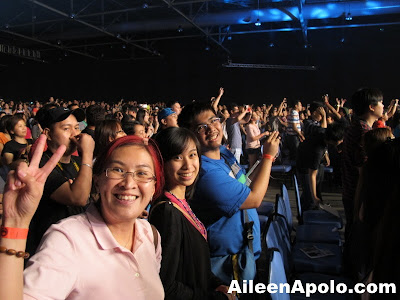 My bagets and niece who were not born yet when the Eheads came to fame watched the concert with me and I'm glad that they enjoyed and managed to sing along to their songs. Miguel even managed to take a lot of photos and uploaded it as soon as we got home! I made sure that he listened to Eheads songs as he was growing up so he could relate to my kind of music. So, it's not just my generation that loves the Eheads, it's also the younger ones and older ones too (my friend Karla's Dad sat beside us during the concert and was singing along all throughout the concert!). 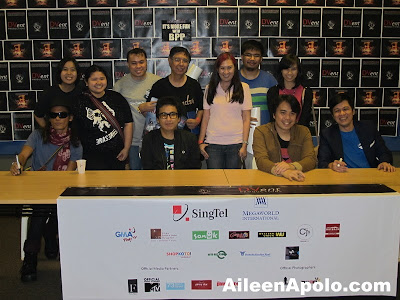 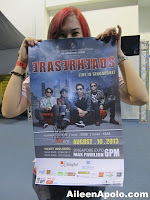 I'd like to say thank you to the organizers, Beyond Photography Productions, for bringing the best Filipino rock band to Singapore and to Arnel for taking care of me, my family and friends.

PS On a side note, I finally got the chance to meet the adorable Marcus Adoro who I have been exchanging emails with for about 2 years now. When I introduced myself to him he immediately took my hand and made mano! Hahaha!

PPS On another note, I had met Ely about 10 years ago at work when he presented our product jingle. I was seriously starstruck and our company president noticed how enamoured I was with Ely. He approved the project because I didn't stop gushing about the Eheads after the meeting (probably to shut me up, haha).
Ipinaskil ni Aileen Apolo-de Jesus sa 8/13/2013 10:45:00 PM No comments: