It’s been almost 7 years since I’ve last been to California. In the last few years my team’s hub was in Europe so I never had the chance to come back to the US. I am marking my 8th year in Google on my birthday this year (yup my work anniv is also my birthday!). I always tell my friends, “Tumanda na ako sa Google!”.

People always ask me how I got my job. I got it because I took the chance (even though the job description was really intimidating) and applied online. I never expected I’d get a call from the recruiter. I actually almost back out of the final interview because my Mom was in the hospital. My parents pushed me to go through the interview. And during the final-final interview I was also very sick with a 41’C fever. I just remember they asked about stats that day. I must’ve rambled the right numbers despite my frying brain coz shortly after that they said I was in. 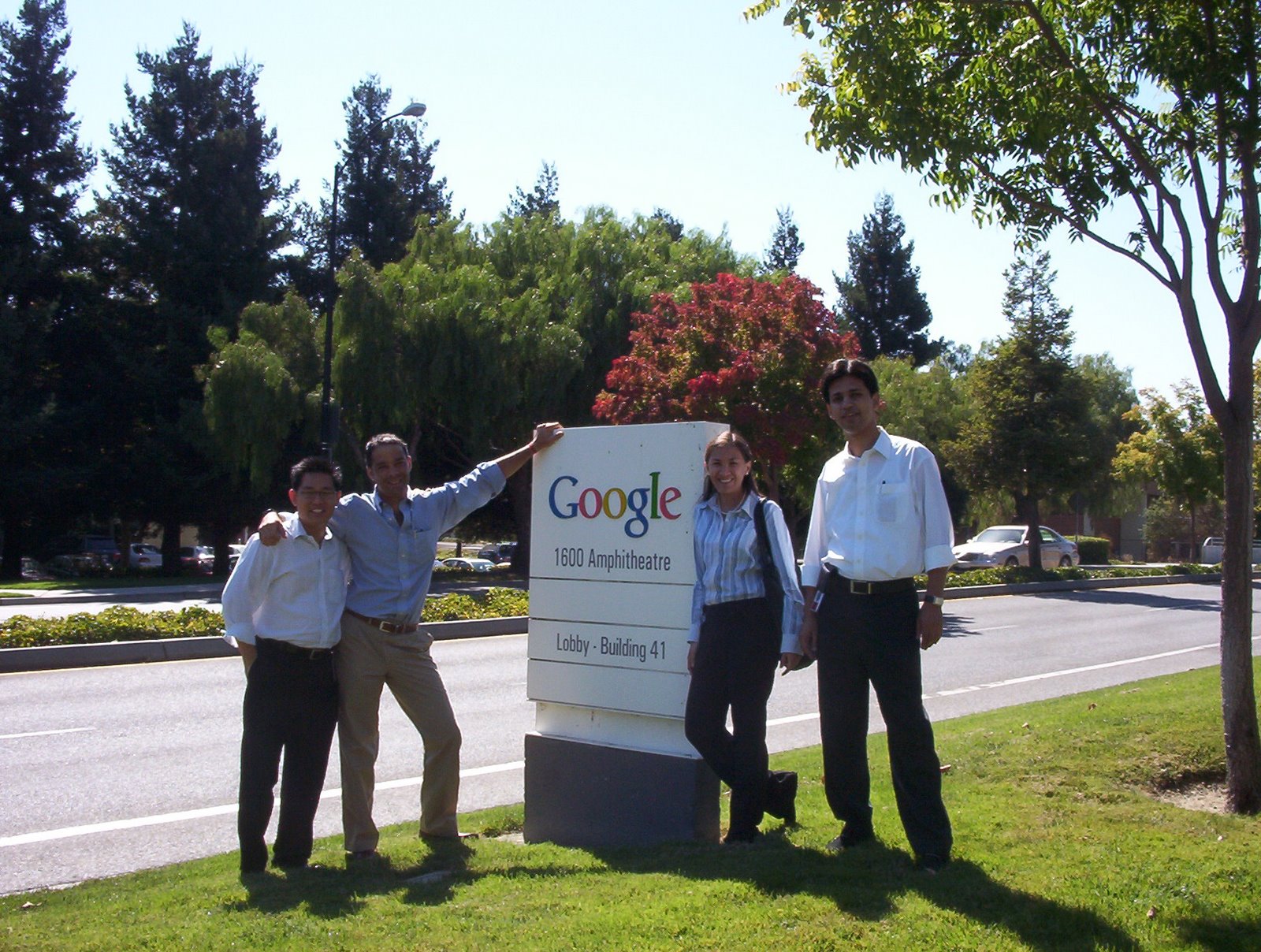 The last 8 years of my life has certainly been very eventful. I learned a lot and have been stretching myself beyond my limits. I never imagined that I’d be able to do the things I’ve been doing and I’m still in awe of the opportunities given to me. I still remember that manghuhula at the Ad Congress in Cebu in 2005 who said, “You have a big star in your right hand. You will have bigger responsibilities and will be known for your work.” I told him, “I just got promoted maybe that’s it.” I never expected what was in my future.

I look back fondly in my last trip to the US. I was certainly at the crossroads when it came to my love life during that time. I was praying hard to find the right one because my September 2007 deadline was near. I told God back then that if I didn’t find the right one by September 30, 2007 it was a sign that I should dedicate my life to service. I was already planning to take my doctorate back then.

But lo and behold, as I was being shown the coastline of San Francisco by a friend, Jay (who was in Manila) kept SMS-ing me and saying that he missed me a lot. My friend was so pissed because my head was down reading messages throughout the stretch of the coastline. Ay sorry naman. When I got home, through my jet lagged brain Jay and I became a couple on Yahoo messenger (yes! Yahoo! Hahaha). And the rest of our love story is history.

I feel this trip truly marks a new chapter of my life. I have a year old heart still ticking (sometimes noisily with the ring attached to the valve). There are a lot of challenges, but with my family, friends and colleagues, everything should be alright.

*Wrote this on the plane to SFO.

Being the youngest in our clan I grew up dotted on by my Mom’s brothers and sisters. I was the cute little thing passed from one uncle and aunt to cousins during our Christmas reunions. I have many photos of this and notedly photos with my uncles carrying me.

I particularly had three very different uncles (my Mom’s brothers). Tito Tony, the noisiest one who loved doing pranks and joke around. He was the most malambing of all and I remember always hugging him because he had a big belly. He would always send pistachio from Saudi Arabia when he worked there and I remember creating a Christmas tree for him using pistachio nuts (yeah I used to be very creative!). He believed on living on the edge and still drank Coke even when his leg already got amputated due to diabetes. I learned from him that you have to live life to the fullest and always keep your family close. 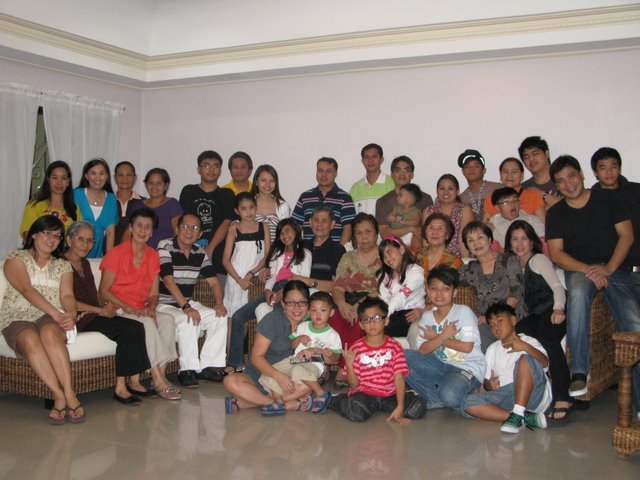 Tito Mon was the uncle with the moustache. He brooded a lot but also laughed a lot. He gave me a lot of advise and was a powerhouse marketing man back in the day. He lived with us off and on for many years and he would regale us with stories during meals. He suffered a lot being away from his family for more than 2 decades, but received forgiveness and reconciliation just before he passed away. I learned from him that even though you make mistakes you have to rise up and make up for it.

The third uncle is my Tito Ben. My godfather twice over, in baptism and in our wedding. He was the quiet one and was part of the military. I was always in awe of him because he always stood tall. He looked a lot like my grandfather who I didn’t meet. He was was always concerned about my safety since I travel a lot and scolded me each every time we saw each other in the last 5 years for traveling by land in a part in the Philippines which he deemed unsafe.

My Tito Ben, my second dad passed away last week.

The last time I visited him in the hospital he was very jolly despite the pain he was probably experiencing having his lungs drained (I know I’ve been through that too). He finally explained to me why he was concerned for my safety. I didn’t know that was the last time I would see him alive. He hugged me and said he loved me.

Tito Ben went through a lot of hardships for his family, but he faced all the challenges head on. I never heard him complain, he just always found ways to make things work. He is also only the second person I know who’s remained faithful to his marriage of more than 50 years (first one is my Dad!). And oh, I also just found out that Tito Ben loves to write and is great with communication and PR. (I always thought I got my love for writing just from my Dad, it really runs pala in the family!).

My Tito Ben was given full military honours last Saturday. I believe he truly deserved it since lived an honourable life serving God, his country, and most especially, his family.

Farewell Tito Ben, now I know you’re with Dad, Tito Tony and Tito Mon. It was really strange dreaming about that a few months back. It was probably their way of warning me that you’d soon be gone too. Please watch over us from up there. Don’t worry about Tita Ming, Titay and Mom, they will be loved and cared for by the whole family.
Ipinaskil ni Aileen Apolo-de Jesus sa 6/23/2014 01:47:00 PM No comments:

I was certainly a handful when I was growing up and I spent a lot of time with my Dad. I noticed I actually have more photos with my Dad when I was a baby. Here's one at the beach where I ran away with his slippers. 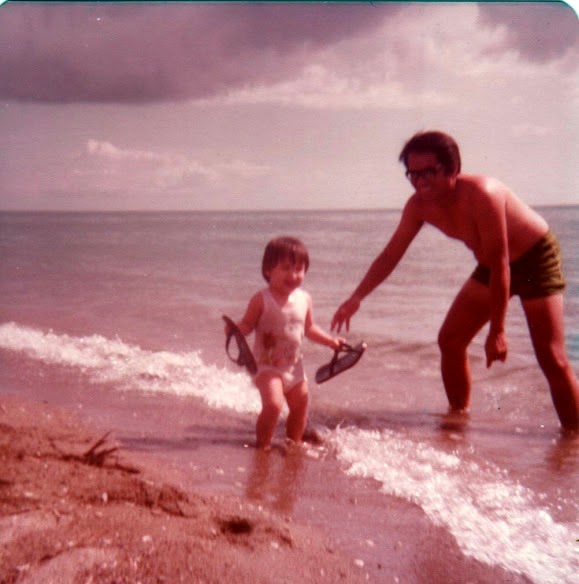 He eventually caught me, but I still wouldn't let go of his slippers (haha). 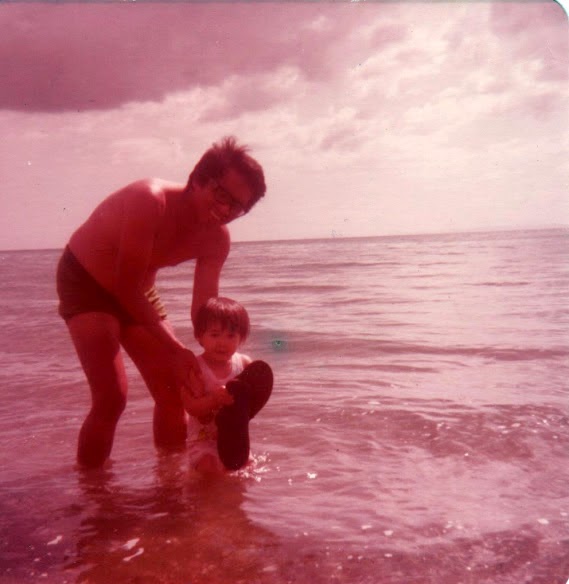 I remember when I was small we'd go on weekly noodle-siopao dates at Luk Yuen in Glorietta (when Glorietta wasn't one big mall yet). He'd eat noodles and I'd eat the siopao balat (I know people say it's dirty but I love that part). When I was in second grade I loved Menudo so much he accompanied me to watch amidst all the screaming teenagers (I never became a fan-girl after that).

My Dad was very strict and I made many wrong decisions along the day, but he was just there patiently waiting for me to do things right. When he had a first bout of cancer I prayed really hard that he'd stay until I manage to settle down. He did. I guess he was also praying that I eventually find the right person because when he gave Sweetie a copy of his book he wrote, "For my FSIL". During that time Jay and I were just a few months into our relationship and were baffled about my Dad's cryptic message. Eventually when Jay and I were engaged my Dad explained that "FSIL" was "Future son-in-law". He liked Jay and had given his "seal of approval" (probably because he's Atenean too!). 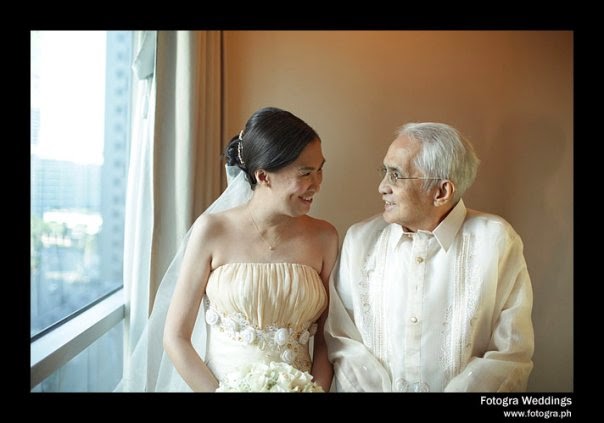 A few months after Jay and I got married Dad's health deteriorated fast. He kept saying that his mission was done and that it was time for him to go back to his creator. Two months after the doctor told us that he had stage 4 cancer he was gone. It's been three years and a half since that fateful day Dad left us, but it still feels very much like yesterday everyday.

Happy Father's day Dad. I know you are watching over us from up there. Miss you!

And, of course, to the other daddies in my life:

Sweetie, I particularly selected this picture coz he was wearing a barong. For being Miguel's Dad. I know we're both a handful! Haha. 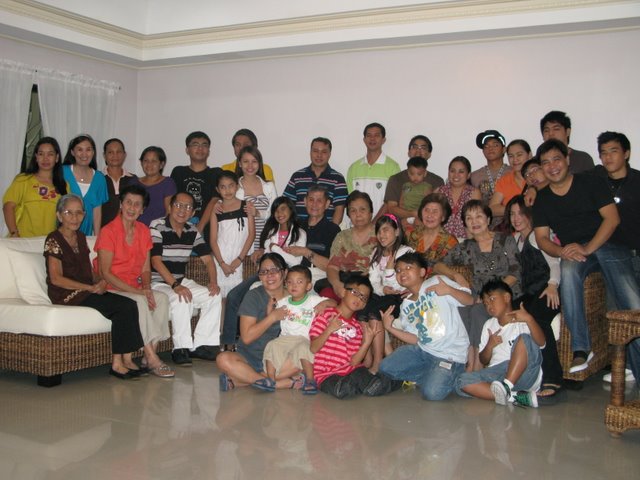 My other daddies, Tito Ben, Tito Tony, Tito Mon and Tito Louie. Being the clan bunso has it's privileges. 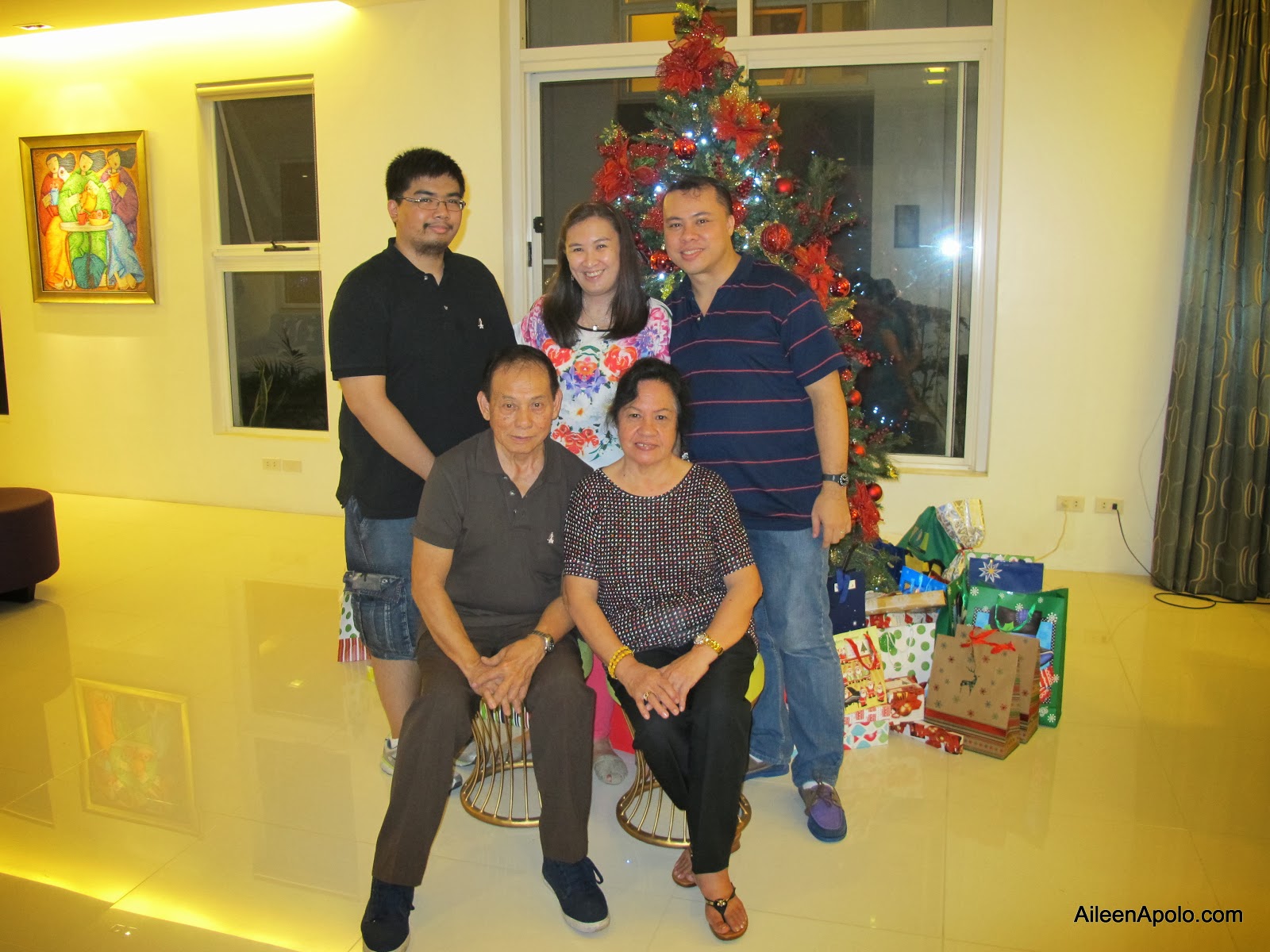 And, of course, my FIL. I certainly enjoy all the questions you ask every time we meet-up, no wonder Sweetie asks a lot of questions too. Haha.

And happy father's day to the rest of my family, friends and colleagues who are daddies.

And to all single moms out there, happy father's day too! I was a dad too for about 15 years!

I am so hung over from the #gsasea summit! I couldn't stop looking at the posts the students are making on G+ and I couldn't help but smile at the auto-awesomed photos.

The last week has been the result of months of hard work we put in to ensure that we are able to provide the best experience to students who have been accepted into the program. Besides the best that we can do is equip the students and catapult them into super stardom.

After rigorous sessions the best part of the summit was the cultural night where the students treated us to traditional and modern dances from their countries. I loved all the performances and ended up dancing everytime a group went up. It's what probably got my sniffles to go away.

The Indonesian GSAs opened the performances which got everyone to stand up and dance.

Here's the hataw number of the Sri Lankan GSAs -

And the mind-blowing performance of the Pakistani GSAs -

Being the host country, the Filipino GSAs treated the audience to several sets of local dances and got everyone to dance to "Pinoy Ako". It was a fitting finale that brought a lot of good vibes.

The last week was made successful with my awesome support system - my boss, my team, my colleagues who took time out to help in the summit, the agency, and my family who made sure I was almost always up and about (have to make sure my one year old heart always works!). And, of course, thank you Papa God for answering our prayers for good weather!

A sincere thank you to everyone who came and supported the summit!