Home on Mondays: Waterproofing your Home

Both our childhood homes were located in flood prone areas. We almost postponed our wedding because we were both badly hit by Typhoon Ondoy. Ended up suspending wedding preps and just crammed a month before the wedding. Because of that we made a promise to live in areas that don't get flooded. We've been successful in not getting flooded, but didn't realize there are other water issues that we'd experience.

We've lived in at least 8 different homes since we married and have had quite a lot of water-related adventures. Here's a list:

It was late night when a pipe in the ceiling of the bathroom in our rental burst and created a waterfall. Sweetie was alone because I was in Sydney and Miggy was in Manila. It was horrifying since the water started leaking out of the bathroom. The condo security turned off both water and electricity so Sweetie missed going to work the next day. Landlord just got someone to patch it up and not really fix the issue. Truly traumatic since we were forced to finish our contract even with the danger of the pipe bursting again. 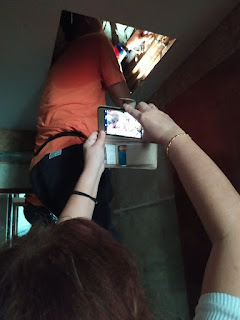 We should have known there were issues with the unit. A week into our stay the kitchen sink started leaking and we had to pay to get it fixed since it was below the threshhold. We also had to have the water fixtures in the bathrooms fixed during our stay and the toilet bowl kept leaking water! Ugh! We learned a valuable lesson not to rush in signing up for a lease and be wary of sweet-talking agents. Last we heard before we moved out, the new landlord was battling with the property because of the huge government construction beside it. We left almost five weeks before our lease ended and just paid the rent to keep our sanity intact.

Well new pipes can also leak if it's not properly installed. Make sure to check all faucets and pipes before you move in. If not immediately fixed, pipe leaks can turn into expensive repair contracts.

3. Always ask when the poso negro was last cleared

Ugh, in the first home we rented there was a weird phenomenon happening in the ground floor bathroom. The shower area drain would spew out poop on its own. Ugh, the experience is still giving me goosebumps and I don't want to write about it again. The full story is here. Just trust me, if you're renting a home always ask when the septic tank was last cleared. Since we know our new home used to be an old home we jumped on the chance to have Maynilad seep the septic tank last summer. 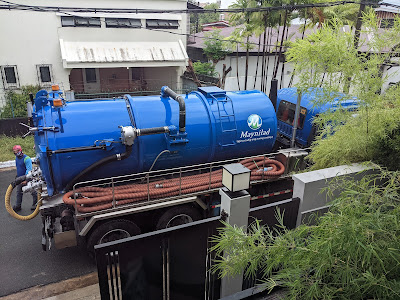 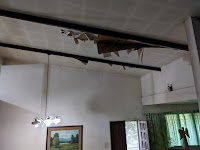 My friend Peter explained that ceilings leaks take a long time before you see it. He said that it starts with a few drops, but by the time you do actually see a leak the issue may have been going on for months. This happened in our new home and luckily the solar installers immediately identified the issue and we were able to tell the contractor what to fix. When I got home I was shocked to witness a waterfall situation in my childhood home when it suddenly rained hard while I was there. The ceiling was in pretty bad shape. Good thing I found a good contractor to fix my Mom's roof. They also advised where the leak started. Don't wait for leaks to turn into waterfalls!

For those living in condos, be wary if you're on the top floor. We've experienced leaks coming from the roof deck. The roof deck of the condo also serves as the laundry area. Get your admin to immediately address bad waterproofing if there are leaks in your unit. The addressed the leak issue, but the ceiling light in Miggy's room never got fixed despite follow-ups. We just had it fixed when the unit was renovated.

5. Sealant will be your best friend

One other place water can come in is through windows and sliding doors. This we learned in our new home. The windows for the most part have been okay, but water has seeped in (and continue to seep in) from the bottom of sliding doors. Sweetie was able to fix it with sealant, but we need to have it addressed professionally since I noticed some damage already in the wall.

Well, the downspout beside my kitchen has been making me pout since early this year. There is certainly an issue because it's been making my kitchen cabinets stinky! Make sure your downspouts properly drain out.

I've been watching architect vlogs because you can learn a lot from them. Architect Oliver Austria posted a video a few months ago about building your shower area. He mentioned that the floor in your shower should be at a certain angle so that the water would naturally flow down the drain. He also went into detail about how the drain pipe should be built. Well, our new home was already built when we bought it and we've been having some issue with our shower drain. Not really sure if it's the type of drain cover or an issue with the drain pipe. We're still figuring that out.

If there's something you need fixed, make sure you get a trustworthy contractor. I've seen several horror stories from neighbors who had their roof and ceiling fixed, but experience a waterfall at the first sign of rain. I honestly prefer asking friends and neighbors for referrals than hiring help via an app. The experience here has not been the same as in Singapore where you can hold those you hire accountable. I'm glad I got a reputable roof repair company to fix my childhood home. I tried hiring someone through the app and his quotation swung from one amount to another. And even though I already said no they kept hounding me.

Hope ya all stay dry!