Last week I wrote about my pain reliever collection. It came up because I injured my arm and it's been hurting. I think it's my torn ligament that got triggered, so I used ointments and PT exercises to alleviate the pain. I had to do that since Sweetie and Miggy were still in isolation when the pain started. It would've been too risky to go see a doctor by myself.

When Sweetie ended his isolation, he introduced me to his collection of hand massage gadgets. Yes, with an "S", haha. He's been trying to find the best hand massage device for a few years now. I never tried it since I did not have a need. I was following some hand massage videos, but the gadget made a huge difference. 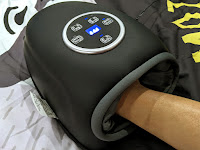 I tried the black one first. It was quite overwhelming and gave too much pressure, so Sweetie aborted the massage after a few seconds. He told me that the long, white one would leave dots on my hand after the massage. I've seen his hand with dots several times after using it, so I skipped using it. The best one among the three was the small white one.

The "Comfier" hand massage device also has good reviews from Jay. I've been using it for over a week now and I feel my arm is almost back to normal. I think what also helped was the heat it would provide while it's massaging your hand. I read that heat is better when you're lower arm hurts. I've now reduced the arm exercises. I also don't use as much pain reliever anymore.

I guess as you age these gadgets help provide relief. Prevention is key though and as my doctors keep reminding me, keep moving!