Plantita Saturdays: Got My Blue Ternate to Bloom More Flowers

Got some blue ternate seeds from this shop and planted them last summer. It took awhile before it sprouted. When it did it started to grow longer and produce many leaves. It just grew longer and longer with no flowers in sight.

I thought maybe I was doing something wrong. Did some research and found out that you have to prune it a bit. It's the way to tell the plant to start blooming. After three months since I planted the seeds it finally bloomed on June 3. It was just one big flower. It was so pretty. 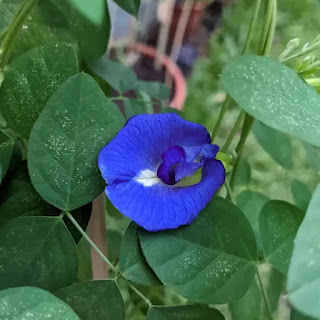 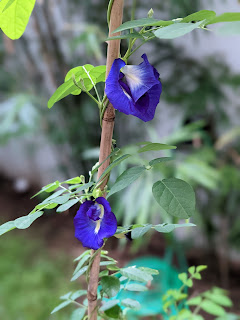 I noticed though that there were tiny dots on it. Also noticed that some of the leaves were being eaten by leaf miners. I immediately cut them off. I got excited when more flowers started to appear. Things quickly went bad when we suddenly had an infestation of caterpillars. To save the plant, I physically removed the caterpillars and treated it with neem oil. Surprisingly, the plant seemed to like the neem oil and started to produce more blooms.

The caterpillars though left the plant weak. It looked sad and got more sad when I got busy taking care of the boys when they got sick. I eventually found the time and started giving the plant some fertilizer. I also sprayed it with neem oil again since the caterpillars came back. After two weeks it started producing big blooms again.

I think we should be able to use the blue ternate flowers for tea! Yay! The secret sauce to getting your blue ternate to bloom more is TLC + weekly fertilizer + neem oil twice a week. :)