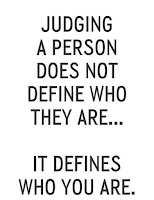 I wonder if there is anyone who has successfully avoided judging others. I watched a video where they did an experimented to see if young children would play with children from other nationalities. They did which goes to show that we learn biases and start judging others as we grow up.

Being judged is painful. When I had Miggy at a young age I was judged by people who I thought were my friends. I was even told, "Sayang ka." Since then I became more careful about who I trusted. I could say that probably caused me to be more picky. It works both ways I guess.

I paused writing this post last night because I realized there's so much to unpack about the verse. That "Sayang ka" incident happened 28 years ago. After that happened I hibernated and focused on my son. I never forgot it since I still see photos of that friend. If I let what she said affect me, I wouldn't be where I am now.

What I learned from that was to be more understanding of others. The other person you may be judging may be going through challenges. That's also one reason why I have avoided posting opinions and comments on what's trending. It's so easy to give our opinions now on current matters. Keep your peace and just keep your opinion to yourself if it's not really going to help the person.