We got a boatload of ginger from a friend. Made salabat and ginger candy out of it and since there were some nuggets left-over I thought I'd try to grow more from scraps. I tried it a few months ago, but I failed. It did not work out because I just immediately put the scraps in soil. I learned that you need to let some roots grow before you plant it in soil. 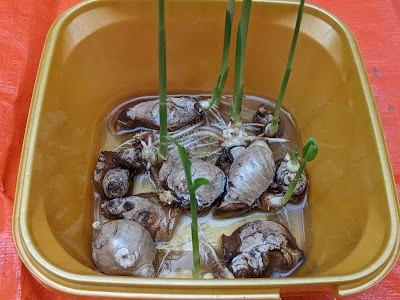 So I put the scraps in a container with half an inch of water. I just used tap water and it took almost a week before it started to grow roots. I changed the water every other day. After two weeks I used rain water and was so surprised that the roots and stem grew so fast overnight. 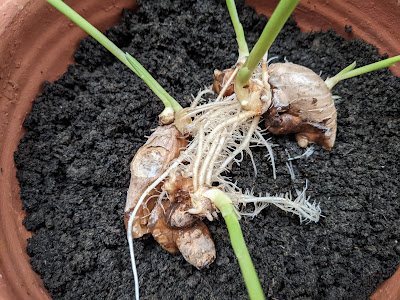 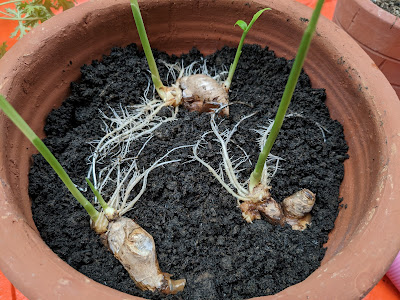 After four weeks I decided to plant the propagated ginger in soil. I selected the ones that had healthy stems and roots. The roots were pretty gnarly, but it was easy to split up. I put 3 to 4 knobs per pot to give it enough space to grow bigger. I'll have to wait 8 to 10 months before I harvest the ginger. 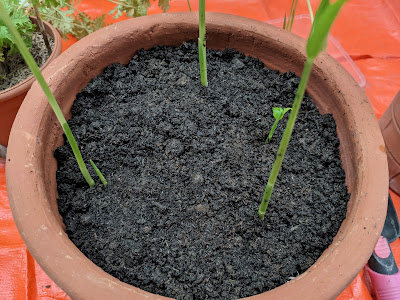 It's been a few days since planted the propagated ginger in soil. I put them in the garage area so they don't get direct sunlight. They seem to have adjusted well and the leaves are now starting to unfurl. Looking forward to harvesting ginger next summer!