Do I have Italian Genes?

I am the youngest in my generation in our clan -- both sides. Being the youngest has it's advantages and disadvantages. As the youngest you have the bunso privilege and you can kinda get away with a lot of stuff. The disadvantage is missing meeting the elders of the family. I grew up only knowing my Mama Lola since my other grandparents passed on even before I was born. I spent a lot of time with my Mama Lola growing up, but I really didn't get to ask her a lot of questions. 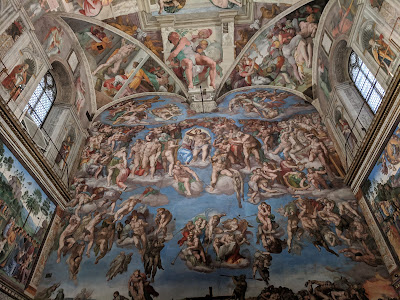 I would have loved to know my lolos and my Dad's mother, Lola Natalia. Because of this I've taken a keen interest on understanding my ancestry a bit better. I know from my Dad that his parents had eloped because at that time Filipino-Chinese marriages were not allowed. I never met any relative from Lola Natalia's side.

I had found a painting in a museum in San Pablo that looked a lot like her. I took a photo of it and showed it to my Dad. He said it was her. I reached out to the museum, but they never responded to me. One of the caretakers said that it was the aunt of the owner, but they didn't know where she was already. So that remains a mystery to me.

One of my cousins has our full family tree. I only found out last night that it was given to Tito Ben by an ambassador from Mexico who told him they were related. My cousin told us last night that someone from Italy reached out to him and said he had family who had migrated to Spain (the Mexico) and the Philippines. I always thought our clan was originally from Spain, it never occurred to me that there was a precursor from that.


This is all new to me and of course my cousin said to be cautious about taking it as fact because we still need to make sure that this person who reached out to him is real. I told him that this information is really interesting because it explains why a number of us have thalassemia (Mediterranean anemia) and why I can eat spaghetti every single day. And probably why I had that same feeling of being at home when I visited Rome (it was the exact same feeling when I visit Taiwan). Maybe it was my genes getting all excited.

I'm still thinking whether it would make sense to ask my cousin to introduce this person to all of us (and whether it's safe). It's just good to know a bit more about where we all came from. My cousin said that the family branches in Spain, Italy and Mexico all used similar names and had very similar professions as well. It would be interesting to someday meet long-lost relatives for both sides of my family.

What do you think?