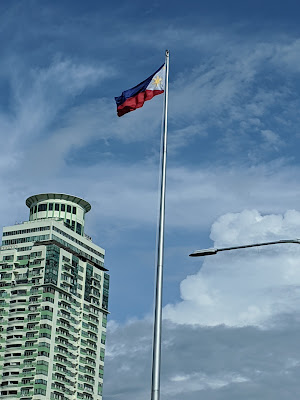 It's been 122 years since my country declared independence from Spain. Throughout the history of the Philippines we've had to declare independence many times. I guess we're just super lovable people that other countries always want to take over us. Okay, it's probably not because we are lovable people, but because we have so much natural resources and others just want to take advantage of that. It's been a bad habit we fall into. We seriously need to think for ourselves and stop this dependence on others (or more appropriately stop allowing others to take advantage of us!).

Which brings my thoughts on the matter of being independent. To be honest my sister was at some point very impatient to see me independent. For years she badgered me to move out of our parents house. I almost did, but my Mom said that it would break my Dad's heart. So Miggy and I stayed with them until I married. We moved 5 minutes away from them and eventually moved two minutes away from them.


I am now living a super independent life. I say super independent because we're far away from family. I used to be so dependent on my parents to get me out of scrapes I get into. All that went away when I lost my Dad and I realized then that I had to be more independent and in return be more helpful to my Mom. It was hard, but moving to another country really helps you to grow up. I hope that's something Miggy would learn. He made the decision to go back home and find his way through life. I hope giving him that freedom would help steer him to his niche.

I think this is what my country needs to do. We individually need to select leaders based on what we all collectively need. Not choose leaders because they give what we personally need. If you look at Philippine history, we had great states-persons  as leaders. We had Lapu-lapu who defeated Magellan. We had those fearless heroes who declared independence from Spain. We had the "Senate that said no". For our generation, we need leaders who would really care for Filipino citizens and who would protect what is rightfully ours.