Bilo Bilo Plus Plus and Mr. Cucumber

Took a break today upon Sweetie's request. My brain though is still on work mode so I had a little difficulty adjusting to not working today. To break it I decided to cook an all-time favorite -- ginataang bilo bilo plus plus. It's plus plus because I added langka and kamote. 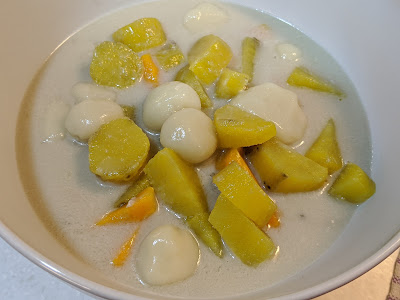 I had so much fun making bilo bilo. I mixed one cup of glutinous rice flour with half a cup of water. Best to add the water slowly. If it's too sticky just add more rice flour until you get a good consistency to shape them into balls. After shaping it into balls put on a plate with rice flour so it doesn't stick together.

In a pot add 2 cups of water, one it's boiling add 2 cups of coconut cream or what they call kakang gata (the first squeeze from shredded coconut). I've had some experience shredding coconut on a traditional shredder when I was a child. We used to have gata (coconut milk) dishes all the time at home since my Mom is Bicolana.

While mixing the water and coconut cream add half a cup of white sugar (less or more depending on how sweet you want it). Make sure the sugar melts. Then add the kamote, langka, sago and let boil. Add the bilo bilo last since it cooks quite fast. Let it simmer for just a few minutes or until the soup thickens. Serve hot! (Maybe next time I should add some corn).

After cooking ginataan I spent some time in the balcony to tend to my plants. It's been six weeks since I planted them and I never thought I'd become a #plantmom. It's been raining hard the past week and I'm hoping that Mr. Sun comes out at least in the mornings to provide much needed vitamins for my plants. They look alright so far, but Mr. Cucumber hmmm did something. The plants are now in a new stage and I need to learn how to care for them at this stage. I'm hoping to harvest something in a months's time. Let's see. 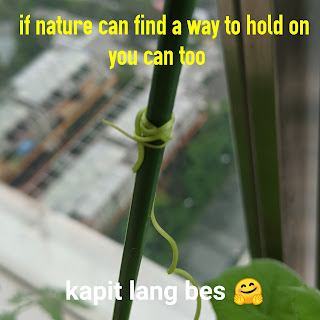 I realized I should have baked some bread this morning, but it's too late to start something now since I have physiotherapy later. I'll probably just do some quilting while waiting for my PT session. Ciao!

1 cup glutinous rice flour (and a little more for the plate)
1/2 cup water (or less, depends on the consistency)