To be honest, I've been having more bad days than good days the past few months. I had a cardiac episode in mid-September and my PTSD was triggered. I rested in bed for almost a week before I could move around again. The PTSD episode took longer to alleviate since a lot of things was happening.

While resting my back started to hurt again. I slowly started exercising based on routines my PT taught me. The strange thing is the pain would start an hour or two before I'd wake up. There were days it was so excruciating, Sweetie would help me get out of bed. The exercise helped, but I would still wake up in pain and sometime I'd cry.

After the fire last week, I set an appointment with my pulmonologist. He said I looked like I gained weight. I probably gained 5 pounds since I last met him six months ago. We went on with the appointment, but he told me two more times to not gain any more weight, haha. He also referred me to a spine doctor since I haven't seen one in over a year. 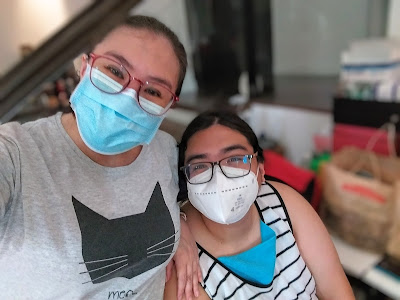 The day after my consultation I looked back on what I've been eating. I don't eat a lot, but I indulged a lot since September. I would justify that since I wasn't feeling well I'd eat whatever I craved. I slowly went back to gardening and I'd sweat a lot from it. I also followed a bedtime exercise routine. It helped a bit, but I felt I needed to do better.

I decided to follow again my favorite cardiologist's advise to losing weight. Count your calories. I immediately re-installed MyFitnessPal and connected my Fitbit to it. After 48 hours I noticed the back pain reduced a lot. I had to stop exercising though since I've been having slight fever and asthma on and off. Things will probably get better in the next few days.

Today's Didache reflection asks, "How can you be a better steward of His gifts?" To me it's taking care of yourself. Make sure you are physically and mentally healthy. It's okay not to be okay, just take it slowly and focus on what will help you become better.

"May the Lord Jesus Christ... encourage your hearts and strengthen them in every good work and word." - 2 Thessalonians 2:16-17