I've been trying to grow veggies the past few months. The funny thing is I have other plants that grew by itself. The seed may have been in the soil or maybe dropped by birds or blown in by the wind. The seeds just grew and overpowered the plant I originally planted. Here's what grew so far --

I originally called this the "alien plant". It grew together with the mustasa seeds I planted. I transplanted the mustasa, but the alien plant kept growing. TBH I just let it grow since I had no idea what it was. I watered it sparingly. It's now about 3 feet tall. It was in a small grow plastic bag for 9 months. I finally transplanted it last month when I found out that it's probably moringa. I'll probably prune it often so it stays short. I read that I could use the leaves to make fertilizer for my green leafy veggies. 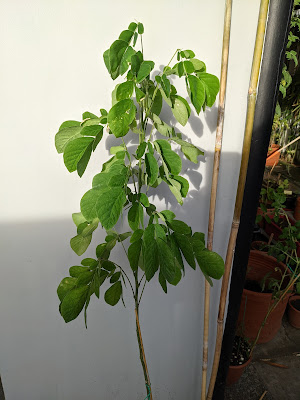 Daisy? Or a Herb?

I planted a couple of fire tree seeds. I was happy when I saw it germinated. As it grew longer and longer I realized it wasn't fire tree, but something else. I let it grow longer, but results from Google Lens kept changing. It was about 18 inches already last week, but the typhoon uprooted it. Well, that means the pot is free again for something else. 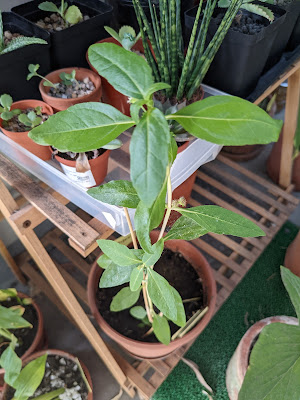 A medicinal plant that's used often in Taiwan. This typhonium blumei just grew in the middle of the grass. It looked like a flowering plant that's why I transplanted it to a pot. It has several leaves now and hope it will flower soon. I'm really curious to see if it produce a maroon flower. Some sites though say it's poisonous, so I transferred it away from my veggies to be sure. This nice looking plant grew with the caixin flowers I was trying to grow. I should have pulled it out as soon as it sprouted because it ate up all the nutrients of the soil. The caixin flowers soon died when it started to grow rapidly (argh!). I've been getting mixed results whenever I try to identify it. Since it's still alive I'll wait it out. 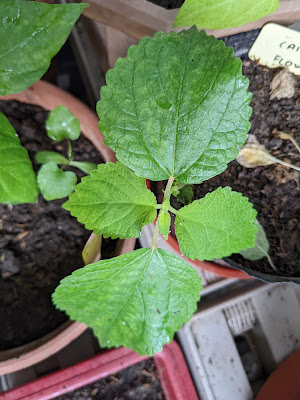 I'm still not sure how I ended up with those plants. I treated the soil before I planted seeds, but nature has it's own way of surviving. I haven't been successful yet in my veggie project and just seeing plants grow make me happy. They have so far been low maintenance, so I'll let them grow.