Home on Mondays: We Ripped Up Our Kitchen

Our kitchen had a lot of issues from top to bottom. Floor tiles started breaking, then we discovered the termites, then the ceiling started leaking in several areas. The leak also affected the lights and the kitchen became too dark to do any cooking. The cabinets and drawers also smelled bad even though we kept it clean. We also couldn't remove stains on the countertop.

It was supposed to be a brand new kitchen when we bought the house. Damages were due to poor workmanship and bad materials. A friend who's a contractor advised me a few months ago to just do some touch-ups since things were still new. We decided to renovate after we found issues in the electrical installation and the damage from the termites. It took just two days for everything in the kitchen to be removed. The first thing the crew checked were the broken tiles. They told us that the tiles were not properly installed that's why they kept getting dislodged*. Unfortunately the same tiles are no longer available, so we decided to change the tiles (the tiles are slippery too).

When the cabinets were removed the workers commented that the material used was just like paper. They said it'll disintegrate once it gets wet. The plywood used for the countertops were not also treated. The cabinets that were removed and moved out soon developed orange mold (Aspergillosis). Imagine if that happened while it was still installed. 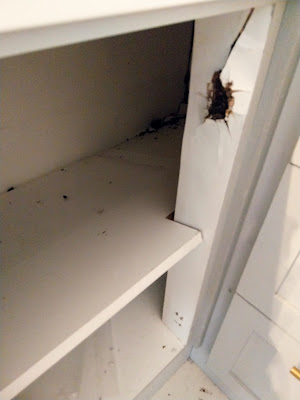 I always thought the bad smell from the cabinets and drawers were due to bad drainage**. Partly it was due to that, but the bigger culprit was the area that the termites infested. We couldn't see it because it was behind the cabinet. It was a really bad infestation and the pest control company said it probably started before we moved in. 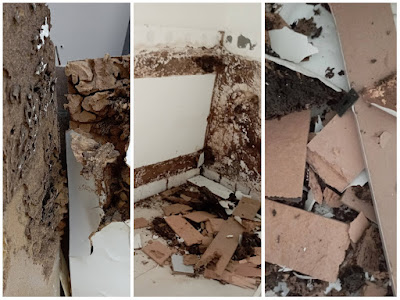 The electrician warned us not to use the lights after heavy rainfall directed the leak to pass through the bulbs. We had been complaining about the leaks for many months, but it was always just a band-aid solution the former contractor did. Electrician also found other issues which is hazardous for us.

I'm glad we decided to renovate the kitchen. I was getting sick also from the smell whenever I got a whiff of it. It is expensive to renovate, but the family's safety is our priority. All we wanted was to have a new home where we could build new happy memories. The journey though has been riddled with issues that could have been avoided.

*This is a problem we're encountering across the house.

**Plumber did confirm that p-traps were not installed across the house.