I started this project last year in Singapore. Originally planned to finish it during quarantine, but I ended up resting. Only started sewing after Christmas since we were busy. I was also iffy if I should continue the project at some point since I realized I should have done my original plan (santa-tree-santa-tree). Oh well, it was already pieced together so I thought I'd finish it to learn a couple of things.

It was my first time to make a tree skirt. It took me some time to make the template. I dug up some Manila paper to make sure my measurements were correct. The ones I saw on Pinterest and FB groups looked really polished and beautiful. I told myself I could always make a new one in the future, besides I started putting up several Christmas trees last year, haha. 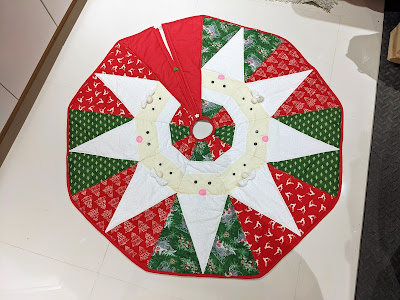 Piecing the design together was easy. It was quite gnarly to sandwich the batting and backing fabric since the project is quite big. I had fun quilting it though since it was my first time to use metallic colored thread (it's inexpensive when you buy it here locally). As it took shape I liked the design a bit more everyday. 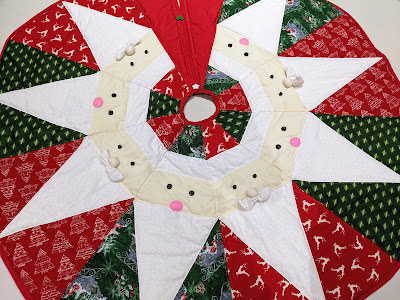 I also struggled with the nose. I thought it would be as easy as making pincushions. My Mom taught me how to make those the summer before high school. Making noses was a bit difficult. I eventually got the hang of it after making half a dozen noses. Lesson learned, use filler instead of leftover batting. It shapes better.