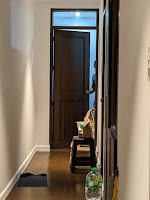 My new cardiologist worked her magic on me and I'm happy to share that I feel I'm getting better. I've been forced to move around more in the past two days when both Sweetie and Miggy had to isolate. I've been able to triple my daily step count average. And I had uninterrupted sleep last night. Yay!

Renewing my stamina has been hard. I told Sweetie it's actually good I've been forced to fend for myself for now. I've had to rest in between serving* them meals. I only wash my own dishes since the boys have their own dishwashing paraphernalia so we could avoid contact. It's been therapeutic even though my knees shake after going up and down several times. What it tells me is I have hope.

I prodded the boys to do an e-consultation today. I reached out to my pulmo, but he resumes his clinic on Monday. They're trying it now. Sweetie's antigen tests have been negative the past 4 days, Miggy also for two days. This is a good sign! I just want to make sure they don't have an infection, so they're talking to a doctor now. Maybe tomorrow Sweetie can rejoin me in the outside world! Yay!

*Thank you to the trusty delivery service!