A good friend sent us two boxes of Randy's Donuts on Miggy's birthday. We weren't even aware that Randy's Donuts is now available here, haha. Our friend though lives in the middle of where the action is so she let's us know whenever there is something new. She knows we never go out, so she takes care of keeping us updated and calorie-filled! 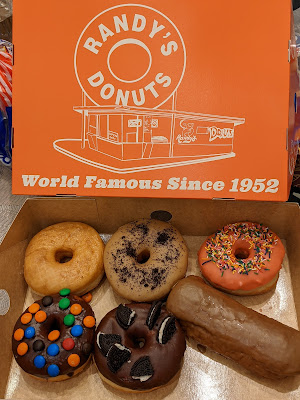 The box was huge. It's as big as KK's box of 12, so I thought she sent two dozen doughnuts. When I opened the box I was surprised to see how huge the doughnuts were. They looked like stuffed toys because of the size. The boys were still in isolation, so I took a photo and asked them to choose. They probably thought the doughnuts were small because they chose two each! They were so shocked when they got the doughnuts. I cannot imagine how they finished two in one sitting. 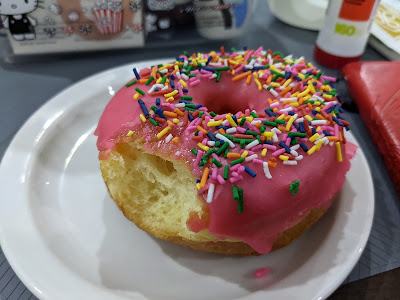 I just got the candy-sprinkled one and it took me an hour to finish it. The candy sprinkles made the pink icing more sweet. Good thing the doughnut itself wasn't sweet. It didn't really have a distinct taste like KK or DD. Those doughnuts I could distinguish from other doughnuts. Randy's Donuts was just okay and a tad bit too sweet. I finished a liter of water while eating one doughnut hehe. 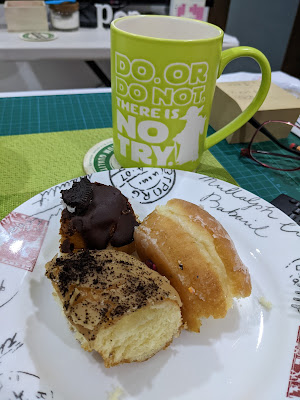 It was good to try and I appreciate my friend got us some. She said she found the doughnuts too sweet and she only eats half. Told her it was a good experience for us to try since I only knew about it from her, haha (it's like we live in the boondocks). Oh, I tried it with coffee this morning and I sliced a fourth of three flavors so I can try different variants. TBH, they all tasted the same haha. It's pairs well with coffee though, so will do that again next time.

Have you tried Randy's Donuts?