As usual we joined this year's Pokemon Go Fest. TBH it's quite expensive at PhP785, although they said it covers 3 days of events. Two this weekend and one in August. It wasn't as hard as previous Go Fests which got quite stressful. This one I felt was just right. It forced us to go out since we part of the tasks included spinning Pokestops. 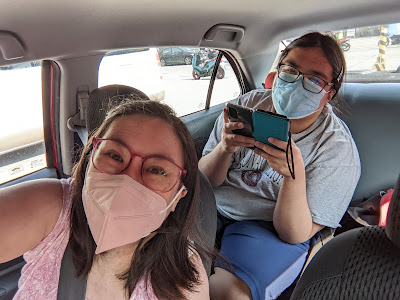 Yes, we still play Pokemon Go. It's the only game I've played this long. I still play because we play it as a family. Outside of Pokemon Go we all play other games. It was more fun to play when we were in Singapore since we used to go out much more. We still use it for exercise since the nearest Pokestop just requires a five minute walk.

Yesterday, we went on a joyride around the park. We didn't go out of our village because traffic was heavy. Today I proposed to the boys to go out and get some pizza takeaway. We did one round around the park and then headed to Shakey's (just had to check whether the mojos in our area still tastes the same hehe). Miggy and I didn't even go down the car hehe.

It was a fun, quiet weekend. I finally managed to sleep well. I tried using the oxygen concentrator last night and I think that helped a lot. My heart wasn't going bonkers when I woke up this morning, so it was a good thing my doctor gave the go signal to use the device. It took us awhile to figure it out, so maybe I'll make a tutorial to help other people like me.

Hope you all had a great weekend!