Back to Regular Programming

The boys are both up and about now. Yay! Miggy ended his self-isolation today. I was really surprised he lost weight! He said he spent time exercising more while he was stuck in his room. To celebrate, we got brunch from Presko Coffee. It was my first time to see their lunch menu. I got the the seafood pink pasta and it's now a new favorite! Yum-yum! 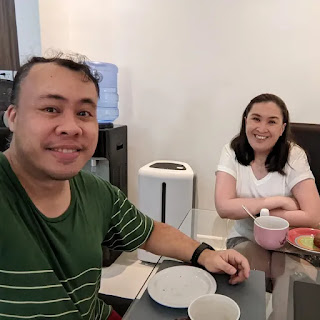 I  must say that the boys getting flu was a blessing in disguise. We were supposed to go on a family vacation this week. Good thing we postponed it because a waterspout (ipo-ipo) was spotted where we were supposed to go. That would have been really scary! Staying home also helped me recover from another bout of heart failure. I feel better now, thanks to my cardiologist. Seeing her next week for a follow-up.

So today was the first day we all got together again. The boys decided to pick up from where we left off two weeks ago. They're unboxing boxes from the condo. We scheduled the Squeaky.ph angels to come tomorrow to clean and disinfect the rooms. They were the ones who packed the boxes a month ago! I guess Sweetie wanted to show that we started working on them haha.

We found some of my favorite kitchen items and a gazillion gift wrappers I got from Divi a long time ago. Also found two crates of Christmas decor we haven't used in 5 years! It's going to be fun setting up maybe four trees this year hahaha. My stamina has improved also, so we should progress better. We're scheduled to start work on improving the storage situation in our new home soon.

Higad situation: found tiny wrigglies in a pot yesterday. I tried scooping them out. It was impossible, so I made a neem oil concoction and watered the plant with it. Checked today and they were dead. I hope the neem oil got the eggs too. Still found five fat ones running around today. That tells me the infestation isn't over yet and I have to be vigilant. I hope it'll be over soon because I want to plant seeds again.