My superman Sweetie is sick. He started to have fever yesterday and was complaining of body ache. He was so busy all weekend taking care of two sets of workers. He also drove me to Makati Med for my heart test, so he was really tired by Saturday night. He still woke up early on Sunday because there was still repairs being made in our home.

Good thing they finished just after lunch. We had him take a nap so he could rest. He went downstairs and joined us to eat. I decided to go back upstairs by 5:30pm to force him to rest again. By six he was having chills. We managed his fever with Biogesic and it slowly went down. We were able to hear mass late in the evening. 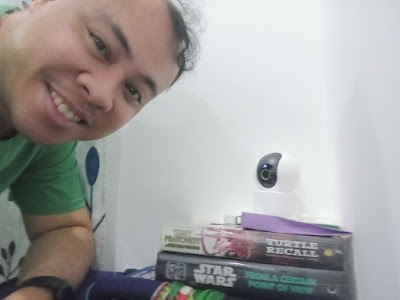 I turn into a light sleeper whenever someone is sick at home. I didn't notice though when Sweetie moved to the guest room at around 5 in the morning. He said with his symptoms it was probably better to isolate. We set up a receiving area outside of the room and I left a box of the antigen test we brought home from Singapore. He took it and it was negative (whew!). He'll still stay in isolation for the meantime even though he doesn't have fever anymore. He'll take the test again tomorrow so we're sure. A friend suggested though we have him do a PCR test, we'll observe for now.

Sweetie had set-up an extra camera in the guest bedroom so we could see the birds hanging out in the area. They have been attracted to the window of the guest bedroom for some strange reason. For now we could see Sweetie through the camera. It really gives me peace of mind to see him. I'm able to monitor his condition also and so far he looks like he's bouncing back really fast. Maybe he just need to really rest. In the meantime, Miggy and I are also grounded and observing our health. Also got help already for some important errands we were supposed to do today.