It's my first higad season in our still relatively new home. Kevin of Epic Gardening said that they may be beneficial for your garden if there's just a few. They do eventually turn into pretty butterflies. I love butterflies and I know these critters are food for the birds too. I'm actively battling them for two reasons. First, I will never forget that time when I almost lost my best friend because of them. We were walking home from the park with Miggy. As we were walking a tree doused us with falling leaves. There was a caterpillar on my bestie's shirt. It was flicked away. We thought nothing about it. Got home and almost an hour later I get a call which I did not understand at all.

I only found out later on that the best friend suffered anaphylaxis from inhaling the caterpillar hair. Some were probably left on the shirt. He was so worried about Miggy that's why he called from the emergency room. That's reason number 1 why I'm actively trying to minimize the invasion. Those things can be nasty. I had two rashes yesterday after spraying neem oil even though I didn't touch any of them. Good thing I was wearing a mask.

Of course, reason number 2 is I don't want my plants to be ruined! I have been trying to grow some flower plants from seed since January. They ate them up! I sprayed a lot of neem oil on them last night and still found several caterpillars on them this afternoon. They seem to prefer flowering plants. Even my pretty aglaonema was not spared. My Mom gave them to me, so I need to make sure I care for them properly. I read they also like seedlings and I've just planted several seeds the past two weeks. Trying to protect those that have sprouted. 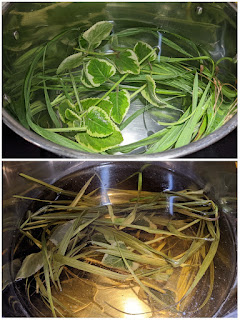 I've been spraying neem oil with castille soap the past few days. I'm not really sure if it's effective since I don't really see any dead caterpillars. I don't want to use chemical insecticides since I read that birds eat them. Neem oil is like a medicine for birds so it's good for them.

I'm about to try a concoction that Kuya Arlan taught me. He told me to boil tanglad (lemongrass) and oregano and use it to spray the plants. Good thing the free oregano plant I got is still very much alive (insects hate it). I also planted the tanglad I got from the supermarket and it's thriving. Got a bunch this afternoon and left it boil. I'm just waiting for it to cool so I can spray again. I read you should spray it at night because that's when the caterpillars actively eat.

Don't ever touch those seemingly cute little things. I was trying to identify the ones we have here now. They're not even the cute green ones, but brown hairy ones. Some of them are so fat they look like tiny stuffed toys. I just ordered a proper garden spray. Bought two so I can give one to my Mom. I think 95% of her plants are flowering plants. So I can't help but worry for her.

How long does higad season last? I remember there was a time when I was in elementary school when the nuns had to suspend classes because of the infestation. We had several huge acacia trees in campus. It was always a bad time for us during higad season because they fall on unsuspecting kids. I was lucky I was spared back then. Hope it will be over soon.