Defeat is Not an Option

My heart sank when I saw several of my plants dead from the higad invasion. The damage: 4 citronella plants, basil, 2 lettuce pots, a caixin flower plant, mustasa and newly planted zinnias. Nakakagalit pramis. I toiled many months to get those plants going and in less than a week they're all gone. But that's nature. What it taught me is to be ready for this when it happens again. 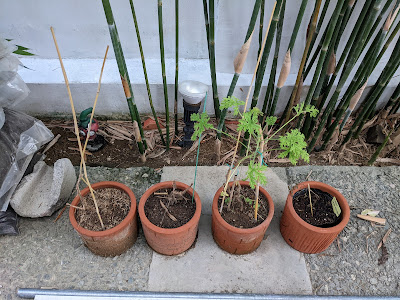 I've been able to so far save some of the plants my Mom gave me. I've been hovering over them, plucking away the critters. I've also been spraying neem oil to ensure that the eggs don't flourish. The tanglad-oregano concoction has worked wonders. I think they hate the smell and run away when sprayed with it. I've seen some freeze and die. I've been spraying everyday since I discovered the invasion and I noticed they are getting thinner by the day.

I'm focusing only on the potted plants since I don't have enough neem oil. I've also taken most of the lemograss and oregano and have to give them time to grow again. I don't think the critters like the bamboo so I've generally just sprayed the ones we pass by often. Even though I'm actively protecting my plants, we have started to see butterflies and moths flying around the house. The nice thing about that is they can help pollinate my tomato plants that are flowering again.

I can't do anything anymore to my plants that I was not able to save. It just means I have to care for the news ones better. I'll probably plant again and buy new plants when the higad season is over. I should probably get some help also to trim the grass and the bamboo. It's starting to look like a forest now here hehe.

Defeat is not an option and that also applies to me. I've been treating this as God's way to push me to move around more. Granted that by early evening I feel like my body will dismantle soon, but two weeks ago I wouldn't have been able to do this. I would also have not been able to take care of my boys. So there is always hope to get better. I just have to be in the right headspace so I can take care of myself and others (including my plants).