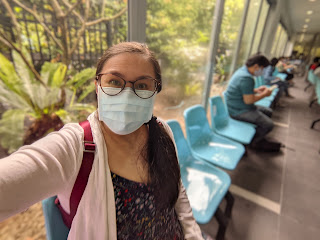 I got a call this morning from my doctor's assistant. They wanted me to come in to see the doctor immediately. The doctor ordered some routine tests and they found something which they want to investigate further.

I thought I could just focus on recovering and getting stronger now. It took me a few weeks to get better after the last test and I've just started to ramp up on exercising again. It was my first time to see that doctor. She was referred by another doctor because she thought it would be good to do a routine check-up to get everything covered.

After the check-up I went to eat. I was feeling glum when I received news that someone passed away. That stopped me from feeling so frustrated. I realized then that God's plan for me is different. I've always wondered why I got the worst latak genes  (LOL). Better me than any of my loved ones.

I wrote this post today to remind all my female friends to get your routine check-up with your gynecologist. I had been busy with my other doctors and brought it up randomly with my uro. She referred me to an OB and I had re-scheduled the appointment thrice before I went. Whew!

Day 17, A personality trait of yours. My fighting spirit. I'm grateful my parents taught me to strong in the face of adversity. I still remember that day when Typhoon Ondoy's floods drowned everything I owned. I was sitting in the kitchen with my Dad and I started to cry. He immediately reprimanded me and said, "Para yun lang iiyak iyak ka na." That was the day I learned how to cope better when disaster strikes.