Why My Heart Went Whoopsies 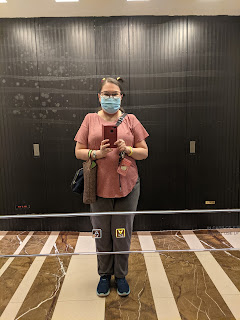 I'm back to my usual cheery self after the staycation Sweetie and I had. My body is still recovering after my heart went whoopsies two weeks ago. My doctors ordered a lot of tests and they said my heart and lungs are okay. I was still baffled though what really happened.

My heart went whoopsies because I had a viral infection. It's a mystery how I got it since I rarely go out. I could only trace it to a taxi driver who was coughing really bad when I boarded his taxi (he opened his window, pulled down his mask and coughed). Unfortunately the virus affected my heart and caused other issues. And that explains why my immune system was so angry.

Whatever it was that afflicted me my body combated it and my mind eventually shooed it away. We have been taking all precautions, but I still picked up a virus. I was advised to just wear a fabric mask and that's probably how I picked up the germs. My other doctor advised it's better for me to use a surgical mask since it could protect me better.

I'm feeling much better now and went for my physio session today. My PT said we'll take it slow until I get confident again. My doctors said I have nothing to worry about. I just need to eat well, get enough sleep, exercise and be happy. Next week I will have some tests which will hopefully show that I can get rid of one of my medications (the one that's making me heavy in the last two years).

Thank you everyone for your continued prayers and love. Hugs to all.