I Jumped Off a Cliff

Sweetie's eyes widened when I told him about that time I jumped over a cliff. Well it was more like a 2-storey high rock in the middle of the Cagayan river.

Sweetie's first question was, "Was it before or after we were married?" Hahaha. I said it happened before we even met. I was pretty adventurous back then (which is a good thing!). My colleagues from VisMin invited me to join them during their assignment at Cagayan de Oro. 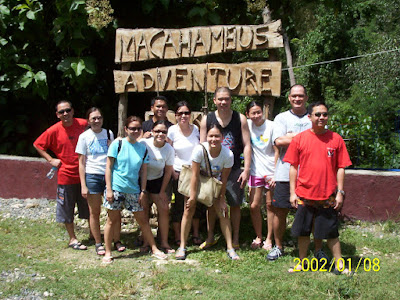 Would you be able to recognize me?

It was raining hard that week, but we got lucky on the day we we went white water rafting. The river was like chocolate milk that day and there was definitely a lot of white water. I was so light weight back then and the guides were worried I might get thrown off the raft. I held on for dear life. 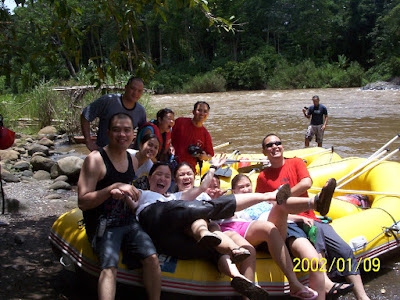 We started early in the morning, had lunch somewhere in the middle of the river and at the end of the course we reached an area which had a very tall mound of rock The guide told us it was our graduation for finishing the course. We had to climb up and jump of it. I didn't hesitate and went up with my colleagues. I was one of the last to jump off and it was pretty windy. I was pushed sideways by the wind when I jumped (that was how lightweight I was!) and it seemed like forever before I reached the water. 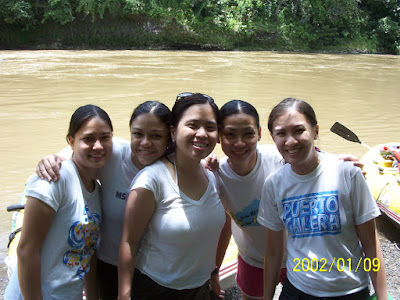 Exhilirating. That's how I felt when I jumped. If I could I'd do it again, but I'd probably be prohibited from jumping off cliffs now haha (I can imagine my boys frowning about this thought). I think it was also that time when I went on a zipline too.

Happy memories from 18 years ago. I look back at those times fondly. I was based in our Manila office, but my VisMin colleagues welcomed me with open arms. Oh how I miss those days and the adventures (and misadventures) we had. Thank you my friends for this wonderful memory.