I was telling Sweetie's stories about my previous jobs and it got me thinking. There has been a lot of changes in technology since I graduated. I was already a sophomore in uni when my alma mater changed all the Olympia typewriters in the lab. From typing class it was changed to computer class. I already knew how to use a computer then because my Kuya enrolled me in logo programming classes when I was just ten years old. I'm from that generation that transitioned from offline learning to using computers. 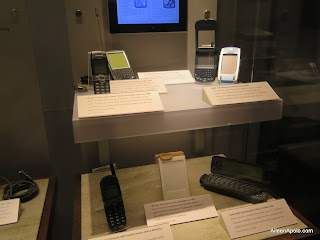 When I graduated from university I was still using a beeper (pager). Yes, that thing only doctors use now. I originally had a Pocketbell one and then I shifted to Easycall. Mobile phones were expensive back then and my first mobile phone was issued by my company. We didn't have a cap back then. I went through several feature phones and eventually got issued a phone with a camera.

A friend eventually gave me an iPhone, I sold it and returned the money to him (he was trying to pay me for consultancy services). My first smart phone was, of course, a NexusOne. I went through all the Nexus phones and now I'm using a Pixel phone. All Android, of course. I was happy using my old Nokia feature phone, but I was forced to get a new Mi Phone for my local sim. They unfortunately turned off the 2G system here in Singapore so I have to use a smartphone for my local sim to work. I still use my Nokia feature phone whenever I go home (it's 9 years old and still working!).

I always had a desktop. My first one I inherited from my Kuya. It was a computer with a floppy disk drive. You had to put DOS disk to boot it first and then slot in the disk with the app and use another disk for your data. Oh, I remember that late night the "devil" virus attacked my system (I think it's officially called Natas).

This is how my first computer looked like (more or less).
I started with a monochrome (green), then my Kuya gave me the black and white (or sepia? Not sure what it's called) monitor.  Eventually my computer got upgraded and my parents gifted me a color monitor (LCD) as my graduation gift. It was a whopping PhP20k back then. My first experience using an Apple Computer was when I worked at Shell as a writer (I was still a student then).

Through the years it was always Kuya or Ting who would help build a new computer for me. It was very expensive. Eventually I just got HP desktops because I used to do a lot of layouts/graphic work etc. I got my first laptop from my current job. For a few years I still kept my desktop, but eventually changed my home computer to a laptop (I seriously need to get rid of my desktop, it's still at home in Manila).

My previous laptops used to be clunky and heavy. Eventually they became slimmer. My first personal laptop was a pink one. It was expensive and cost PhP70k. I used it for a few years before it went underwater during Typhoon Ondoy. I exchanged it for a netbook. At work, I used whatever was issued to me. I can easily switch from an Apple computer, to a Windows one to a Chromebook.

From clunky expensive computers, I'm now happily using old Chromebooks for personal use. I haven't bought a new computer in 7 years. Everything I do now is browser dependent. If I wanted to buy a new Chromebook it will probably just cost between PhP15k to 18k. My hand-me-down from Miggy still works so I probably wouldn't need a new computer until this conks out.

I realized I could go on and on about changes in technology in the last 25 years since I graduated. I'll probably blog this as a series (it might turn into a book haha). So for today I'll just write about communication and productivity. What about you? What has your experience been like?