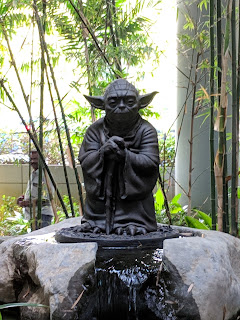 I've had this thing for aliens since I was a child. I was a young child when I watched Star Wars, ET and Star Trek. Later on I was also enamored by Alf! My Mom absolutely abhored my fascination for aliens and banned me from re-watching ET when I was pregnant with Miguel.

Growing up I collected a lot of stuff, but most of it went under water during Typhoon Ondoy. After that it took me years before I started collected anything again. It was a colleague, Hadi, who actually started me on collected Yoda stuff. We had this contest at work where we had to decorate our team work spaces. We decided on Star Wars and I just came in one day and my desk was decorated based on the character of Yoda.

After that day I thought about it and realized I was ready to start collecting again. I decided on Yoda because he's my hero, I find him cute and I thought that it would be pretty limited compared to the other Star Wars characters. My collection was supposed to be limited to small Yoda figures, but it has expanded to other things because of family and friends who have been indulging my love for Yoda (thank you so much!).

I've been intending to make a catalogue of what I have, but I haven't had time to do it. Here's a short video of my collection which is in my home in Singapore (will find time to turn it into a Youtube video). It's been hard to make a new video since my shrine is quite cramped now and I have to find a way to expand the space. Some of my Yoda items are also in Manila.

Now about the Mandalorian baby Yoda... I'm still thinking whether I would collect that or stick to old Yoda hehe. What do you think?