Nine years ago I lost my Dad and I miss him every single day. I've always been Daddy's little girl since everyone would say I look more like him than my Mom. I always rejected that thought because I always wanted to look like my Mom. Eventually though I realized I'm probably the best mix of both of them among us (haha). I could claim that because I'm the youngest and can always flash my "youngest privilege" with my siblings (hrhrhr). 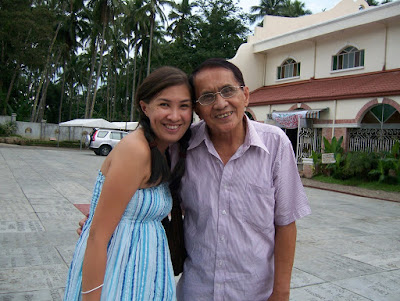 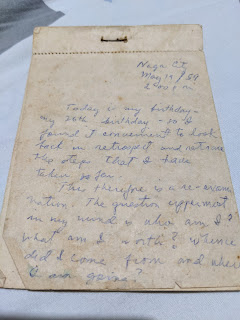 A few years ago my Mom gave me Daddy's Retrospect. It was a note he wrote in Naga City on May 19, 1959 at 2 in the afternoon. It was his 26th birthday and here's what he wrote on the first page -

"Today is my birthday - my 26th birthday - so I found it convenient to look back in retrospect and retrace the steps that I have taken so far.

"This therefore is a re-examination. The question uppermost in my mind is who am I? What am I worth? Where did I come from and where am I (sic) going?"

He wrote the retrospect in a small notepad. The 15-pages traced back where he came from and the struggles the family went through after Nanay passed away. My grandfather, Tatay, was the buntal magnate of Quezon at that time. Exporting to Hong Kong and Japan, unfortunately he was duped by a partner so he lost everything. The family then moved from Lucban to Surigao, but because they were being chased by the Japanese they went back to Lucena via batil. Dad completed his education because of his sister, Tita Emer who took care of him after Nanay passed away.

At the end of his retrospect my Dad said that he missed Nanay very much, but his sweetheart had become his guiding light. In the end he said that at that point he was still nobody, but he noted that he would strive to help farmers since that's what he had always wanted to do. And he did. My Mom has told us stories that when they were newly married and my Dad was a young lawyer he'd help farmers. They always received farm goods in their doorsteps as payment for his services.

My Mom gave me Daddy's retrospect because she probably thought I'd need it the most (plus I'm the only one who understands my Dad's handwriting!). Looking back now I could say that my Dad definitely became someone. He is respected by many. Even until now I would hear people talk about him and they would think of how he would resolve an issue (like What would Joe do?). My Dad navigated his life where he always wanted it to go - to be of service to many.

Dad said in his retrospect that no one would really understand how hard it is to lose a parent at a very young age. In the last few days before he passed away he told my Mom that Nanay was picking him up already. He said he was finally happy to be reunited with Nanay. I understand Dad's pain because it's the same pain I carry since I lost him.

I miss you Dad. I know it's not a coincidence that your retrospect magically showed up today. You are reminding me to remember where I really want to be. Perhaps it's also time for me to write a retrospect for myself and share this retrospect to your grandchildren. Please watch over us up there and say hello to Tito Ben since I found one of his notes to me also! <3 <3