Have you been Watching "The Witcher"?

I've been watching "The Witcher" the past week with Miguel. I have no background about it and was just curious after reading posts from friends who watched it. Honestly the real reason why I thought it would be good to watch is Henry Cavill. Haha! I remember watching him on Superman and liked his rugged looks (the boys slept through the movie though...).

Anyway, we started watching early this week. Two episodes straight and I told Miguel we should just watch two at most per day because it was quite overwhelming. I think I need to watch the whole season one more time since there were so many elements to take in. Good thing Miguel was there to explain things to me. We looked this way while watching (this photo is from Reddit) - 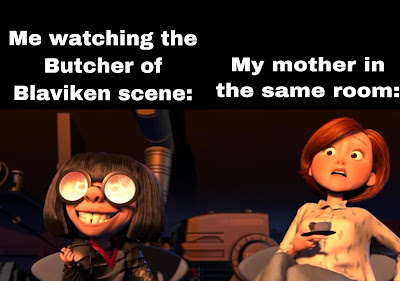 We went out yesterday because I wanted to go to the bookstore. I also wanted to buy the books behind "The Witcher" too, but they are unfortunately out of stock. After finishing all the episodes today we've been watching videos about "The Witcher" on YouTube. Aside from the cast and director interviews, episode explanations, more details about monsters, what was interesting to watch also were the back-end scenes and how they did the VFX. It's fascinating to see the many elements needed to put together a huge undertaking.

I read there's an ongoing debate on the period where the show is set. So I'll say that it seems to be set in the medieval period/dark ages. I've always been fascinated reading fiction from that era so this show definitely piqued my interest. Sword fights, knights, mages, sorcerers, monsters, castles, warrior queens, dragons... there's so much to see from this show. And I repeat, I need to watch it again to take it all in better.

Email ThisBlogThis!Share to TwitterShare to FacebookShare to Pinterest
Mga etiketa: the witcher, the witcher review, will my mom like the witcher?