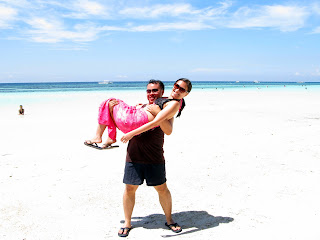 Happy first of June and happy Pride Month everyone!

Five months of 2021 has passed! Wow! It went by a little slower for me since I've just focused on getting well. I focused on surviving during the first quarter of the year. I didn't expect to have another PE*. My breathing started to improve only in April.

Now that I could breathe a bit better I focused the second quarter on improving my stamina and energy. I finally achieved 5k steps again on April 30 when we went to the Star Wars Identities exhibit. I had to work on my step count again post-cardiac cath, but I think I'm better now compared to a month ago.

This month I want to graduate from gentle exercises to something a bit more advanced. I found an old photo of Sweetie carrying me in Bohol. It's from a decade ago when we were younger and had better bodies (haha). For now I just want to be able to jump again! And maybe go up a flight of stairs without huffing and puffing. I also hope this will be the month we finally solve the mystery of where my PEs are coming from.

I woke up this morning energized and excited to meet a new doctor. I had to postpone the appointment again because I felt nauseous after taking a shower. Boo! I still have days that don't go on as planned so I just play it by ear everyday. The nausea went away after a nap and got better after I ate a banana. I still hope I can do some spinning later to start my 30-day daily exercise challenge. Join me! Yes?

Praying for a jumping, jolly June!