I had a bad dream last night. In it I was very angry. I don't know why I was angry. Sweetie woke me up because I was making a fuss. When I went back to sleep I dreamt my Mom and Dad were there. My Dad was trying to tell me something. I'm not sure what it was.

I had a dizzy spell before I went to sleep last night. It just came so suddenly while I was brushing my teeth. I haven't had that for awhile now. I think it's from stress from being away from work for so long now. When I woke up I still felt angry. I'm angry and frustrated that I'm still unwell.

I had to meet someone this morning and I was afraid that I might end up directing my frustration at him. It was three minutes before my meeting. I prayed. I also looked for today's GodWhispers and got this - 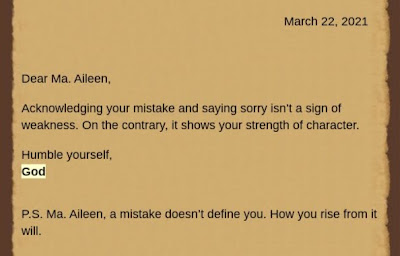 Prayer is truly powerful. Have a great week my friends.