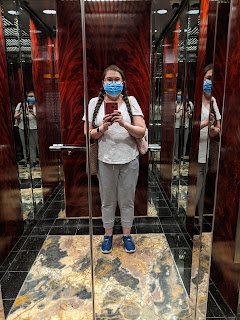 The last time I really felt I was progressing was when I was discharged in mid-January. That was the time I worked on increasing the number of steps I could make. The progress stopped when I started bleeding and had to be hospitalized again. I picked up almost where I left off after I got discharged, but progress has been very slow which has been very frustrating.

I've been trying to increase my activities at home and also trying to increase the number of meters I could walk in one go. I also rested a lot in between our walks, but my breathing the last few days has not been good. I've also been having frequent asthma attacks and a lot of headaches. It was really bad last night I thought I had to go to the ER. Luckily I managed.

I'm not sure if its caused by food (or too much food) or something else. I've been taking my medication as prescribed, but I think maybe the new blood thinner isn't doing it's job. Or maybe I'm not hiyang to it. I realize though that in January I was taking pain medication also and that probably helped me progress faster.  If things aren't better in a day or two I'll go see my doctor.

There's the point also that I may have been pushing myself too hard. All the things I've been going through lately is new to me and I'm not used to just sitting and waiting for it to go away. Just before I started this post I was feeling a bit dizzy, but because I'm just sitting I picked up my computer and started typing away. Sweetie said, "Kaya mo ba? Kala ko nahihilo ka?" Errrm, yes, bad habit.