Once in a Blue Moon and a Moonless Sky Tale

Growing up I oftentimes heard Frank Sinatra's song "Blue Moon" playing on the radio. My parents preferred to listen to songs from their era and my Mom had her radio permanently on what I called the oldies channel. There's many different definitions of what blue moon means. 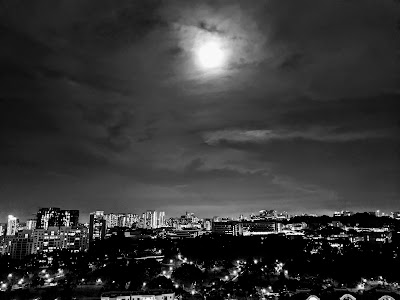 In our current time, blue moon refers to the second moon that comes out in the same month. I read though that blue moon was a term that farmers used to identify the fourth moon of the quarter. It is rare for two moons to come out in a month, it only happens every 2 years and 8 months. And that's also the reason why we use the expression "once in a blue moon".

Once in a blue moon I was in a city in the southern part of the Philippines. I remembered about my trip there when I realized it's the last day of October... it's halloween. At that time I was advised to stay at the hotel nearest to the airport. I just dropped my things in the room after check in and rushed out for the activities scheduled for that day. When I got back it was quite late and this is what I wrote on my other blog after it happened ten years ago, from "Tales from the Moonless Sky" --

After watching my favorite evening shows I settled in one of the beds and exchanged text messages with my husband. I soon fell asleep. I'm a deep sleeper so I rarely wake up when it's not time to wake up. I also rarely wake up in the middle of the night to use the toilet.

I don't know what time it was but I was suddenly awakened by the feeling of someone sitting beside my right foot. I opened my eyes and looked. Nobody was there (I left one light open before I slept). I then felt whatever it was creeping under the covers and I felt its weight going up from my legs. When I felt its heavy weight on my chest I suddenly prayed the “Our Father” out loud in a hoarse voice and prayed for the soul to rest in peace. It was gone after a few lines. I continued to pray the “Hail Mary” and “Glory Be” and felt the presence leave the room entirely. Good thing I managed to go back to sleep.

Strangely enough at around 7 in the morning the radio suddenly turned on. I would've understood that it was possible somebody programmed it, but the radio was the old style, not programmable traditional one.

Ahhh one thing I didn't write about is what I discovered the next day. I normally check out what's outside of my room from the window and just briefly saw a huge tree. My friends said I probably caught the attention of whatever it was that visited me in the middle of the night. It was a really scary experience and it was a good thing I only stayed there for a night.

After that I haven't had any significant strange experiences. If I feel anything strange I just normally say a prayer and it goes away. One of my former colleagues explained to me that when you have spirit encounters they normally just need prayers so don't be afraid.

For everyone back home, please take care! I hope and pray everyone will be safe from #RollyPH.