Something Happened to the Money Plant

Our former landlord gifted us a money plant. We were scared to take care of it in the beginning, but the landlord insisted we keep it. They just told us to water it once a week. It thrived in our old place. We put it on a small platform with wheels so we could move it around when it was too sunny.

Whenever Mom visited she would fix the plant. It just grew longer and longer and she told me to tend to the vine when it grows longer. We never had issues with it in our old place. We found the perfect spot for it and the plant looked happy... until early last month. 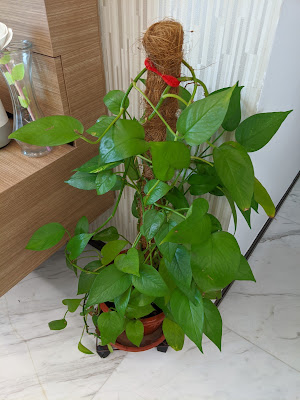 We noticed that a leaf started to go yellow. It would happen sometimes so I thought it was just a random leaf that would go yellow. Eventually the stem started to turn yellow too. That was when I started to read up on what was possibly happening to the plant. The article I read suggested that it might be too cold for the area it was in. I moved it to the hallway by the kitchen so it could still get some morning sunlight. The bad stem yellowing persisted. 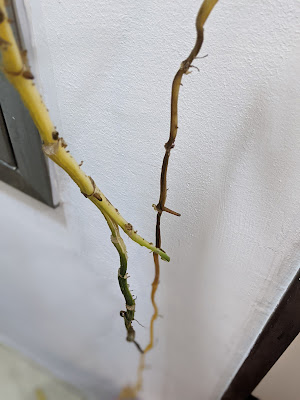 When I got home today I noticed that the whole stem from the bottom was already yellow. I decided to yank it out since I realized it was just one of the several stems. I originally thought there was just one stem (stupid me for not checking). I saw the root had rotted out. So now we probably need to check the soil and make sure it's dry before we water it again. 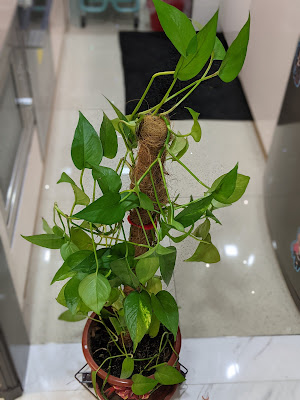 This is her today. I realized we've been calling her "Plant" for 4 years now.
Maybe I should give her a name?

Poor money plant :'( I cut a part of the vine and now I'm trying to grow some roots from it. It's a very beautiful plant, I hope root rotting won't happen again.