The Lesson from the Wasp

Today while conducting a webinar an insect started buzzing around me. For some strange reason it kept landing on top of my Chromebook. I thought it was a bee so I would just gently blow on it to shoo it away. I've been bitten by a bee a few times when I was a child. The bite is really painful.

Because the insect was hanging out so close to me I was able to snap a photo of it. I sent the photo to my seatmate and he said it might be a hornet. Google Lens suggested it was a wasp. Eeeeep! My seatmate suggested I should kill it, but I said they pollinate my tomatoes. Normally they head towards the door to the balcony so I just waited. 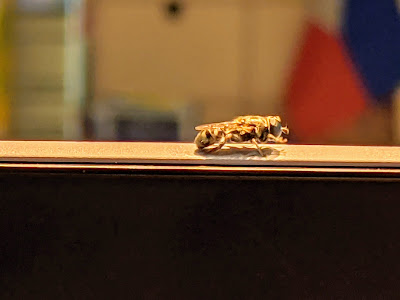 Four hours passed and the wasp was still there buzzing around me. It eventually started coming towards me and I read that if a wasp bites you 30-40 times it can get dangerous. So I went into action and captured it with a bag. I thought maybe it would suffocate, but I realized it might get out and bite me since it's already threatened. I had to do what I didn't want to do. RIP wasp.

I learned a lesson from this pest today. If there's a threat nearby, don't wait for it to come bite you. Sometimes you need to take immediate action before the threat can bring you down.

What's it with insects this week? Haha.

PS On another photo Google Lens said it might be a hoverfly. Whatever insect it might me I don't want it to bite me!