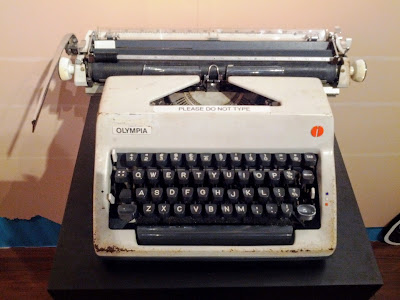 We had typing class in high school. Our teacher, Mrs. Ponce, had us decorate brown paper bags. We used it as our "blindfold" whenever we had typing tests. She'd play some music whenever we had exams. That was supposed to help us type faster since the songs were pretty upbeat. My seatmate, Rica, shared the playlist of the songs on Spotify (look for "Mrs. Ponce's Typing Class Playlist).

We also had a typing class when I was a froshie in college. The typewriters were soon replaced by computers. We were the last batch that had typing class. Kids nowadays won't experience getting their hands dirty changing the typewriter ribbon. They also won't experience getting their fingers stuck between keys. Also, no need to use liquid paper whenever you make a mistake. And they won't be able to prank others by interchanging the keys.

The heavy typewriter may be gone now, but I have many happy memories of using it. A portable one made me editor-in-chief of our literary folio in college. I just borrowed the portable typewriter then from a friend. It was also the last typewriter I used, since I've been using computers eversince that fateful day.