Home on Mondays: The Termites are Almost Gone

Two months ago a cabinet door in the kitchen came off when the contractor was checking something. The hinge wasn't attached to the wall anymore. They said it was likely termites. It was horrific to find out that our new home had termites! We immediately SOS'd the pest control company who's been servicing our childhood homes. They came immediately and said we got the most destructive kind. They started battling the termites just before we went to Bohol. 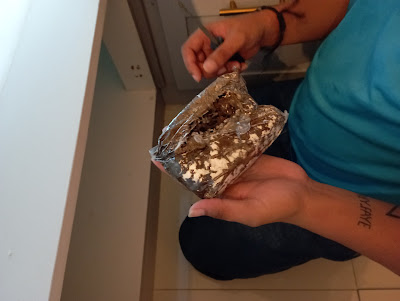 The pest control company came several more times in the past two months to check the bait they left. A few weeks ago I discovered that another cabinet door was starting to be unhinged. Good thing the pest control company came a day after and told us that the termites relocated under the sink. They also taught us how to hear the termites while they're gathering food. Here's how they look and sound -

"Do not disturb them," was the one instruction the pest control company gave us. They told us to avoid pounding the area where they were feeding. I was concerned that they were under the sink, but they said it was okay to wash dishes there. They tied the cabinet door so we don't accidentally open it. Well, we reduced kitchen activity altogether so we don't disturb the pests.

My childhood home is also free of the pests now. They told us there were three kinds when they started working on the house. What we learned is both old and new houses can be infested as long as there's an infestation around your home. We were told that the termites came from the dead tree across our house. They said that termites will look for food within 50 to 100 radius. Don't try to treat them on your own because they will easily move to another area within your home if disturbed.

I'm glad we got a reliable pest company. :)