I'm declaring a new season of gardening! The past few months have been really challenging (higad infestation!) and I think we've finally turned the corner. I still get caterpillars in my garden, but I think the infestation is under control. The neighbor also did some garden keeping and I hope this would reduce the critters. 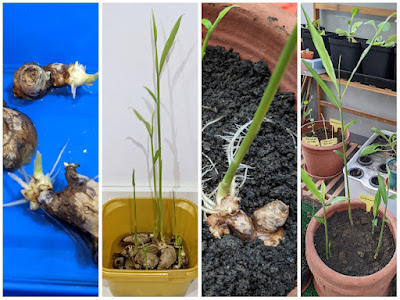 I started the season by planting in soil the ginger and tumeric kitchen scraps I propagated. I propagated the scraps in water in late July and planted them in soil after 4 weeks. I was surprised to see them shoot up so fast after planting them in soil. The secret sauce was using rainwater. My plants love it so I have a drum that collects rainwater in the garage. I haven't watered my plants with Maynilad water since the rainy season started. 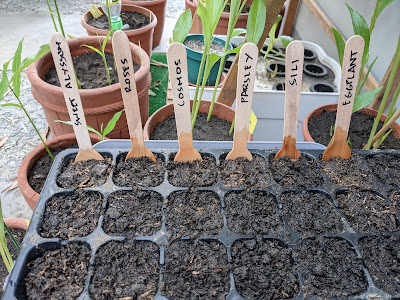 When the air quality this week got better, I took the opportunity to plant new seeds. I have collected quite a lot of seeds. I planted some early this year, but most did not survive the higad infestation. I learned though that if you fail the first time in gardening, just do it again until you succeed. I was able to buy some flower seeds and will try to plant them. I hope I'll be able to give my Mom some since she prefers flowering plants than veggies. I'm going to try planting lettuce again for the third time. 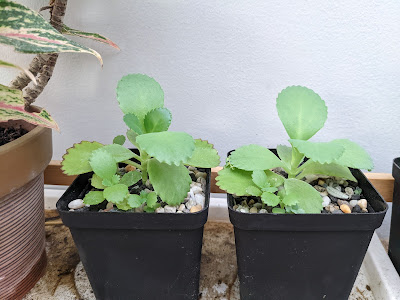 I was able to save my tomato plants and I'm eagerly awaiting for it to flower. I have to vigilant though since caterpillars seem to love eating it. The tomato plants went through a phase where it just kept going longer. I re-planted two stalks since the wind would sometimes accidentally nick it. So I have two separate plants now growing nicely in the garage. It's starting to produce flowers. I'l probably need to help it be pollinated.

Saved the plants Mom gave me (aglaonema, petunia etc.) and they have grown back the leaves the caterpillars munched on. The plants Ate Rose gave me have all adjusted. I probably need to re-pot the kalanchoe since they've grown so fast. I also re-potted a lily that just grew in the middle of the garden. It's looking good now (see, no need to buy plants haha).

Crossing my fingers that the next few months will be uneventful for the garden! :)