I was supposed to create one second everyday vids this year. The habit though hasn't stuck and I keep forgetting take videos everyday, haha. I've so far only been able to post for the month of January, so I thought I'd do it for my birthday month. I was able to do it for half the month and just caught up with it yesterday, hahaha. Well, I'll try again this month. 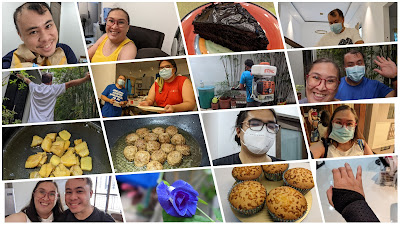 August was definitely not a lakwatsa month. The boys got out of quarantine only on the second week of August and then I had to rest due to overfatigue. The only thing I have to show for the month was baking apple pie and cheese cupcake. The closest we did to a lakwatsa was cooking Ikea meatballs and ordering food in for my birthday! Well, here's the 1SE video -

I guess I'm not a natural vlogger. I'd rather savor a moment than film it, a.k.a. I'm just lazy haha. It really takes a lot of preparation whenever I make tutorials and that's why I'm not consistent with it. I'm the same when we travel. I was lucky to get some footage when we went to Bohol. I've made peace with myself about it and just make do with whatever I'm able to get.

Let's hope September would be a better month! Cases have apparently gone down. Or maybe we can do some joyrides around the park, haha.