My Dad would have been 87 today. It's been ten years since we celebrated his birthday with him. 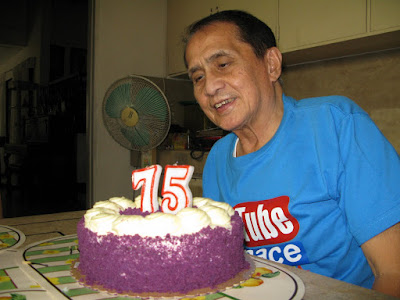 My Dad was the funny one between my parents. I take after my being makulit after him. He was the one who was malambing. What I miss most about my Dad is his presence. He was my rock and I never thought anything bad could happen to me as long as he was there.
Growing up my Dad would regularly bring me out on dates. We'd go to his favorite place "Luk Yuen" in what is now called Glorietta. Or we'd go to Dayrit's. He'd buy me ice cream every Sunday after hearing mass. I'd hang out with him and his friends at the tennis court or I'd bike alongside them while they would walk around the park. I remember hanging out at lot at his law office too.
It's been 9 years since I lost my Dad. I was beside him when his pulse slowly ebbed away. It was the most painful thing I went through in my life. A friend recently asked me how I coped and I told her I threw myself at work. Looking back I realized I kept myself so busy so that it won't hurt as much. It's not been good for me because I ended up not taking care of myself properly. It was Daddy who always watched out for me especially when I was sick.
After 9 long years of salving the pain with work I've learned to slow down (a little) and I'm taking care of myself better. I'm grateful that I have a friend who reached out to lean on me at this time. This helped me resolve the pain of losing my Dad. I'd like to think that he's relieved that I've finally realized this and he's smiling up there in heaven.
I love you Daddy and happy birthday!
#CB43  #WFH37 #StuckAtHomeDay74 #StayHome #BeKind
Ipinaskil ni Aileen Apolo-de Jesus sa 5/19/2020 11:59:00 PM