I had an anxiety attack last night. It was so bad I thought I was having another pulmonary embolism. Checked my oxygen saturation and it was normal. A friend pointed out I was having an anxiety attack. I immediately stopped watching the news and went to the bedroom to lie down. The boys gave me some ice cream and that helped calm me down a bit. Eventually used some peace & calming oil. It was already 3 in the morning when I finally fell into a fitful sleep. 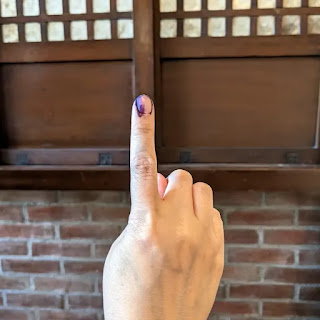 I have so many questions and the PM in me tells me it was just impossible for the transmissions to come in so fast. How could they have possibly reached those numbers when friends who are part of the BOC were still counting at city-level. Many precincts have also not closed because people were still voting. There were many, many posts last night, but I did not want to remain hopeful. I told myself to cling to what I learned at my previous job. When in doubt, look at the data. Determine the truth through data.

So that's what I'm holding onto. The truth. I want to see first the true details of the data. That's how I will accept things. That's how I will cope. I was woken up by my tablet this morning. It strangely auto-played the Cebuyaas video of Doc Tricia speaking at the rally. She was sharing about how much fake news her family has experienced. She pointed out that they felt they were not alone because there was so many who have been defending them. She also reminded that the work doesn't end at the rally and that there is so much to do.

VP Leni Robredo said the same thing in her statement last night. There are anomalies and it's best to get to find out the truth. If it's true that the numbers for us to win is not enough, our fight doesn't stop here. We have to continue the work. Ninety days may not have been enough and what that tells me is there is still a lot of work to do.

And that's how I'm coping now. I'm trying my best not to overthink and be too emotional. It will not be good for my health if I do. Let's hold on to the truth and then go from there.