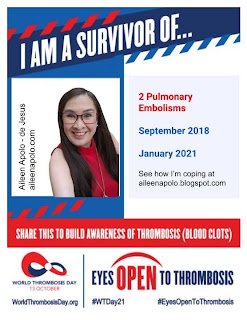 World Thrombosis Day was last October 13. I've been so busy I didn't notice that the 13th passed already. I am a survivor of two pulmonary embolisms. The first one was in 2018 which remained undetected for many months. I had to advocate for myself to get a second opinion since my first respiratory doctor just kept piling me with asthma meds. Several trips to the ER also did not catch the culprit. It came to a point I could barely walk at work. I could have died.

The doctor at the clinic where I insisted to get a referral to a specialist laughed at me. He said I was just going to get the same diagnosis of asthma. I knew though something was terribly wrong. I could barely do any of my regular activities. Because I was lead to believe it was asthma I'd sleep with an air filter beside me. I'd sleep sitting upright. It took a week of tests before my new doctor figured it out. He originally thought it was COPD. After several tests they saw I had a massive blood clot in my left lung.

Investigations to find out the cause followed after finding the clot. It wasn't genetic. It wasn't caused by a DVT. Months later I ended up with an interventional radiologist who declared I had May Thurner Syndrome. He recommended a stent, but my cardiovascular surgeon vetoed it. I was able to resume my activities, albeit a bit slower, but I easily got exhausted. I was in fighting mode though and got better with physiotherapy.

I was supposed to go off blood thinners by December 2020. My doctor transitioned me from Xarelto to Plavix. A week later after I started I was warded again. I went through CT scans, but the radiologist said they only saw residual clots (meaning it was the old clot). Two weeks later I was warded again and my respiratory doctor instinctively had me tested and saw I had multiple new clots.

The second clot in January 2021 proved to be too much for my body. I went through numerous tests again - blood tests, leg scans, venogram, VQ scan, cardiac catheterization, two biopsies and even more blood tests - to figure out what the cause of my clots were (you need to know so you can prevent it from happening again). Oh did I mention I was warded again ten days after discharge?

Coping with pulmonary embolism is a huge struggle. It drains you physically and mentally. In the past year I've had to visit a doctor every week. I am lucky to have the support of my family and close friends. It is not easy to understand what I've been through, but I am a survivor. The disease has taken away a lot from me, but I'm happy that I found the real me again and my faith is stronger than ever.

Here's a shortlist how I coped:

1. Faith, lots of prayers and prayers from family and friends

2. Supportive family and friends, I now know who really loves me

4. It was also helpful to be part of the Pulmonary Embolism support group (it also helps when you're feeling better to help others who just found out they've had a PE)

5. Writing everyday has also helped me. My doctor insisted I keep myself busy so I don't deteriorate. Early this year typing on a keyboard was the only thing I could do. I struggled with brain fog, but it started clearing up when my medicine dosage was adjusted.

The most important thing I've learned through is the importance of advocating for yourself. Only you know your body the best. The cause of my clots will remain a mystery (multi discipline doctors have investigated to no avail). It's okay not to know, what's important is I'm still alive and I'm finally stable enough to go back home.

Bottomless thank yous and appreciation from my doctors, the amazing nurses and medtechs and other health workers who have been taking care of me. For my family and friends, thank you for loving me, praying for me and being there through this.

Feel free to ask any questions by leaving a comment below or you can drop me a message through my FB page or YouTube channel.