One thing about the elections that fascinates me is that it breeds creativity. Candidates would sell themselves in many different ways, forms and means. Some are cute, most are just plain annoying and because of that I've developed the skill of muting the TV in Flash Gordon speed.

I've so far refused to attend any election related-event, especially FGD's with candidates. I'd like to remain impartial and since Senator Jovito Salonga ran for president I never supported anyone else. My choice, my vote will remain a secret. I am still mulling over whether I would make a post and how I will choose and hopefully I'd get to do the Google Squared I've been planning the past few months.

I've been closely monitoring the level of interest of internet users though on presidential and vice-presidential candidates. I do this through "Insights for Search". It's a great way to check out who people are interested in at a given period of time. Here's a sample of searches done using the names of 5 presidentiables in the last 12 months. Notice how Villar bumped up in January, perhaps because of the gazillion of ads he has everywhere.

The above chart is based on searches on Google. 7-Eleven recently launched their project called `7-Elections'. It's essentially where people who purchase their Gulp beverage can choose their presidentiable based on the cup they purchase. The cups have barcodes that would record the choice and tracking can be monitored through the 7-Elections site. One cool thing I'm looking forward to is the fact that 7-Eleven will embed the points on a Google Maps overlay (woohoo!). 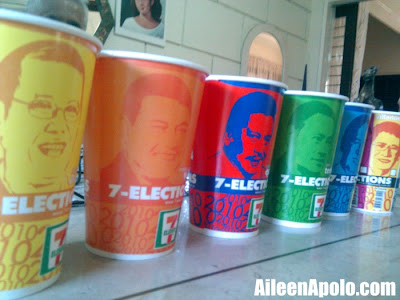