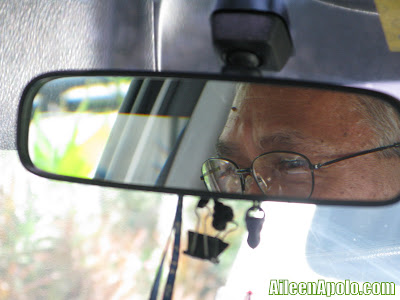 I've taken so many cabs in my life and I've had both good and bad experiences. Most of the bad experiences I remember well, but the good ones aren't really that significant since I'm already happy when the driver brings me to where I'm headed without complain.

It was Manong Rom who was dispatched to my house when I requested for a cab. The dispatcher also excitedly mentioned to me that the car was new. When I got in the cab Manong Rom shared to me that his cab was new and the first one in the set of the new fleet. He also said that he was awarded as the best driver for the year in 2007 and received other awards because he was not absent for 5 years and never had an accident.
Manong Rom's also very talented. He said he was fluent in speaking Arabic (and gave samples) and also showcased to me all the foreign and local languages he knew how to speak. And I could just mumble that I understood "Bicol". He said that if I put my mind into it I would definitely, easily learn other languages.
The trip to Manila from Paranaque was quite long and Manong Rom also managed to tell me a ghost story! And that I guess I'll share one of these days on Tales of the Moonless Sky.
Thanks Manong Rom for bringing me safely to my meeting.